Greentree Grind UNC Week. The Canes had the week off after suffering arguably the worst loss in the history of the program against MIDDLE TENNESSEE STATE UNIVERSITY… Yes, that taste is still in the mouth of all the fans and supporters of the program. No, a win against North Carolina will not take that taste away either. Nothing will. But a win against a coastal division rival that is riding a 3-game win streak in this series will make everyone feel at least a little better.

The last time the UNC Tar Heels waltzed into Hard Rock Stadium the Miami defense set records, and not in good ways. Yes, that game. The one where UNC rushed for 554 yards and put up 778 total yards in a beat down to the tune of 62-26. The taste of that game hasn’t left the mouths of most Miami fans either. The Canes should play with vengeance.

So here are five ways Miami can improve from Week 4 against MTSU to Week 6 against North Carolina at Hard Rock Stadium.

Miami HC Mario Cristobal says the Canes had a “physical week” during the bye.

There was a camp-like approach, with an eye, of course, on letting guys heal up and recover as needed.

1. PHYSICALITY UP FRONT
For all the positive reviews given to the offensive line through the first 3 games, you can sweep it all under the rug. The Miami offensive line was DOMINATED by a defensive line that for all intents and purposes should have been handled. Center Jakai Clark admitted in the post-game press conference that the team overlooked MTSU. That isn’t acceptable, and this team has not been a team that can afford to overlook anyone for some time.

The offensive line was exposed by a team that simply wanted to win each down more than they did. The communication and simple blitz pick up struggled. The quarterbacks, running backs, tight ends, and offensive line can all improve in that regard if they want any kind of offensive success moving forward. Simply put, however, the Miami offensive line needs to return to being a group that is the aggressor and brings the physicality to the other team’s front seven and not the other way around.

2. COMMUNICATION
I alluded to the lack of communication up front that led to some free-runners at our quarterback in the game against MTSU. On the flip side of that, the defensive backs need to do much better job of communicating coverages and leverages against a UNC team that is highly explosive in the passing game. There were 2 instances where a miscommunication led to a MTSU explosive touchdown, and several instances where a player’s leverage showed he was expecting help from a safety over top and that safety was not there. These are controllable things that must be cleaned up if Miami looks to contain a highly explosive offense in UNC.

3. MANO A MANO
It is no surprise to those who have followed the team since fall camp that the wide receivers are struggling to separate and make plays. What is more surprising, is that the defensive backs group that was heralded in the fall has struggled mightily in man coverage. There is no sugar coating it: the perimeter play for Miami must improve if they want to win the coastal division this season. Wide receivers must strike some fear in opposing DB’s for playing man, and DB’s must hold up better than they have by limiting the explosive plays. 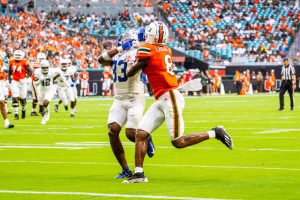 Frank Ladson going for a catch vs MTSU

5. BROYLES AWARD ME…. PLEASE JUST ONE TIME?
Miami has been waiting and waiting for Josh Gattis to show how he earned the Broyles Award, but each week the offense has seemed to take steps backwards. This was never more obvious than when your franchise quarterback (who nearly every pundit had going in the 1st Round of the upcoming NFL Draft) was benched against, you guessed it, Middle Tennessee State. That is regression on a historic level. The quarterbacks coach, offensive coordinator, and even the head coach must hold some weight of that failure. Head Coach Mario Cristobal noted in his UNC week press-conference that everything was evaluated, and the supporting cast must do better.

Tyler Van Dyke said he's been in the meeting room with Miami OC Josh Gattis, QB coach Frank Ponce, discussing what he's happy running with the offense, etc. "I'm being here more with them than being here on my own. Just trying to get better with them."

He is correct. The supporting cast from the receivers to the backs and offensive line must do a better job executing to allow Tyler the opportunity to thrive. However, this does not absolve the coaches who are also a part of the ‘supporting cast’. They must adjust their scheme in a way that puts players in position to be more successful: whether that is formational (please spread out the defense to give your OL and QB easier ID’s), pre-snap quick game attachments (what happened to quick bubbles when the safety is playing 10 yards off and the linebacker is jammed in the box), or more exotic RPO’s (that give crashing defenders more hesitancy to blow up a running game that is already outnumbered). It is incumbent on Josh Gattis and the offensive staff to provide the team with more schematic solutions, and it is even MORE important for the players to be prepared to execute.

It is gut-check time early in the 2022 season for Miami. Saturday will tell Canes nation a lot about where this program is headed for the remainder of the fall. Go Canes.