Greentree Grind- Duke Week. The Canes look to start a winning streak as they come off a close 20-14 win in Blacksburg against Virginia Tech. The Canes came out strong for a change in the first half and looked to roll. But a poor second half performance from the offense and a poor fourth quarter from the defense had the fans sweating it out. What should have been a blow-out victory never happened. What should have felt like a step in the right direction, felt more like taking one step forward and two steps back.

Miami will be tested yet again at home against a Duke team that doesn’t present much of a shear talent threat, but where this team lacks in talent they more than make up for in sound, fundamental football. You could say, it is a total opposite of what has been going on in Coral Gables for years. The Canes will look to shore up some of their deficiencies and stay in the win column against a team that will test their discipline, fundamentals, and skills.

So here are five ways Miami can improve from Week 7 against Virginia Tech to Week 8 against Duke at Hard Rock Stadium. 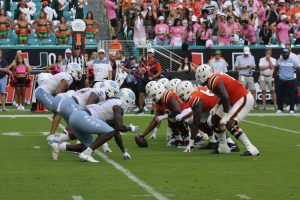 RUN BLOCKING
The run blocking looked solid in the first three games of the season. This was highlighted by a 175-yard rushing performance against a very talented front seven in Texas A&M. Since that performance, the University of Miami has rushed for 180-yards… total. In the 3 games following, they are averaging 1.96 yards per carry. It is also important to note that the average rushing defense of the 3 teams they have played is 78th in the country with MTSU at 67th, VT at 54th, and UNC coming in at a whopping 112th (we ran for 42 yards against them specifically).

The Duke rushing defense is a pedestrian 62nd in the country and is giving up 141.5 yards per game. The Miami Hurricanes can take the next step as an offense by providing some support to their passing game with a serviceable rushing attack. Some semblances of balance in the offense would do wonders for a team looking to simply score more points.

PENALTIES
The Miami Hurricanes went into last weekend’s match up against Virginia Tech as the least penalized team in the conference. They left the game with 17 penalties for 159 yards. This team is simply not good enough to gift the other team 159 yards in hidden yardage in conference contests. Some penalties were a result of hard football, but the procedural penalties and disciplinary penalties should not be tolerated moving forward. The Canes can take a step forward by cutting out those controllable issues. This must get cleaned up if Miami looks to win this home game against a better opponent.

Mario Cristobal to WQAM at the half: "Clean those penalties up so we can play more dominant football — play Hurricanes football. Lot of guys are stepping up." Miami has been flagged 8 times for 79 yards, but leads Virginia Tech 17-0.

PROTECT THE ROCK
Your Miami Hurricanes currently hold a 2-2 record at home this year. In this week’s press conference, Head Coach Mario Cristobal alluded to the tradition of 58 straight home game victories and how The U was built on protecting the home field. Home games should be considered an advantage to your team, and the Canes can take a step forward by protecting their home field and getting back in the win column to establish a winning record at Hard Rock Stadium.

GROWN MAN GAME
Miami has done a good job of containing opponents’ running games this year. The Canes are 14th in rushing defense in college football holding opponents to 98.2 yards per game on the ground. The Canes are second in conference in holding opponents to 3.05 yards per rush. That WILL BE TESTED this week against a team who relies HEAVILY on the running game with a dual-threat quarterback to ensure them manageable 3rd down situations. Duke is 24th in the country and 2nd in the ACC averaging 205.9 yards per game on the ground.

They have a veteran offensive line, use several types of rush concepts, and utilize an athletic quarterback to give their offense a leg up in the box. Duke will look to establish the run early as they are coming off an impressive 297-yard rushing performance again UNC (yes, the same UNC we only ran for 42 yards against). Although to this point Miami has done well in stopping the run, they will have an opportunity to frankly win the game with their front seven on Saturday if they can shut down the Blue Devil running game.

2ND HALF OFFENSE… SCORE POINTS PLEASE
Anyone watching the team this year has likely noticed the obvious deficiencies in the red zone this year. However, another poor offensive trend for has begun to reveal itself and effect the team in the win column. In the 3 games against Power 5 opponents, the Canes have managed to score just ONE (1) touchdown in the second half (4th Quarter TD pass to Colbie Young against UNC). Even worse, in the second half against P5 opponents the offense has scored 6 (2 FG’s) against TAMU, 7 (1 TD) against UNC, and 3 (1 FG) against Virginia Tech… that is an average of 5.33 points in the second half against Power 5 competition.

For comparison, last season with Rhett Lashlee the Miami offense averaged 15.4 points in the second half against P5 competition. In truth, the 2022 offense is only managing to score 17.67 points per game against P5 defenses. This is massive regression. The bottom line is the defense is carrying the team this year, and this team will not turn the corner until the OFFENSE SCORES MORE POINTS (ESPECIALLY IN THE SECOND HALF). The offense will have another chance to right this wrong against a Duke defense that is giving up 27.2 points per game to P5 offenses.

The good and bad news: the Canes are still their own worst enemy.

This team is not good enough to overlook Duke. If the Canes can stop the Blue Devil running attack, run the ball effectively themselves and play more disciplined than last week there is a chance.  And you have to find a way to score more points in the second half. Personally, I believe they find themselves in the winner’s column and create some momentum heading into the back half of this season.