Rome wasn’t built in a day as they say. If anything drives that point home for me it’s been the last 20 years of Miami Hurricanes’ football fandom. Preseason hype and bluster. Lackluster performances on the field at noon in front of 20K fans. Realization that this season is going to go the way of so many others. Eventually replace coach. Start cycle all over again. It feels that way right now, but Coach Cristobal has done it before. He has built programs before and you can see on the film what he is talking about in regards to winning culture, as what some players are putting on film simply does not meet that standard. Follow along as we highlight some off the major plays in this week’s matchup with Duke in this week’s Miami Hurricanes film review.

Flagg has improved this season, but the lack of foot speed and lack of size continue to show up on film. He chases the QB down the LOS but actually tackles his pursuit defender Smith here and doesn’t even touch the Duke QB. If Stevenson doesn’t beat his block on the edge they give up the sideline with the QB in this spot. 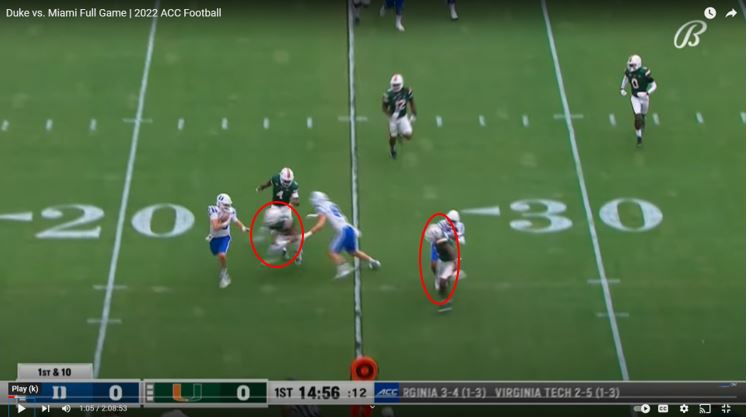 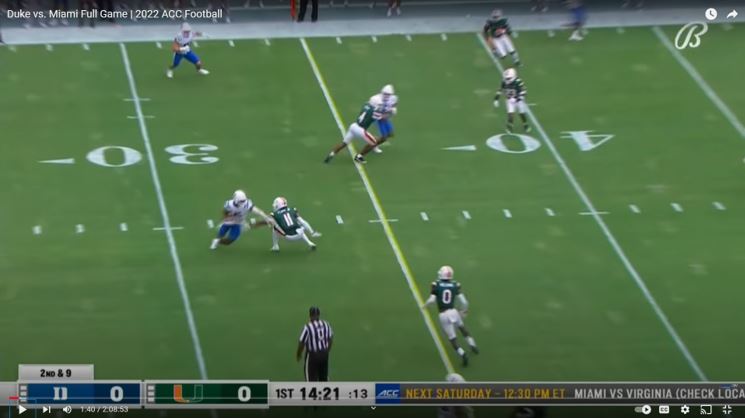 The OC calls some easy buttons early on for the QB and Miami holds on the edge on the first one and then drops a play setup pretty well here. Brinson has to catch this ball and he’s got a chance for some solid yards. 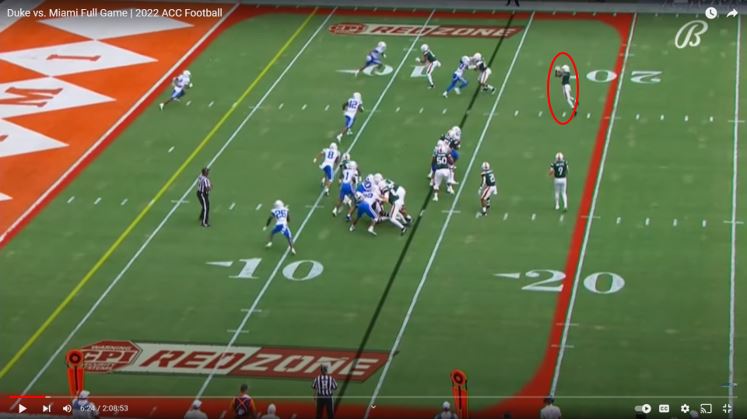 Miami runs crossers in the end zone against zone and two defenders carry one receiver and none carry Young and it’s an easy TD. Nice job by Knighton to give TVD the extra second he needed on this one against an edge defender. 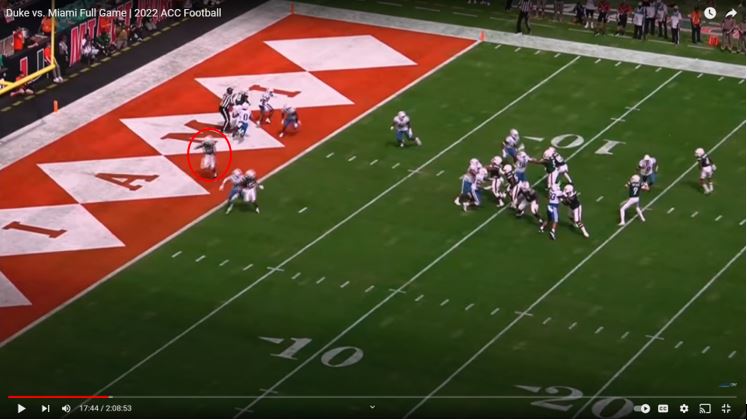 I watched this play live and just said to myself, “that is textbook” when Mesidor pushed outside to protect against the end-around and force him to bubble, but remained on-balance to redirect and tackle the QB if he keeps. He did and it was a tackle by Mesidor. Great play. 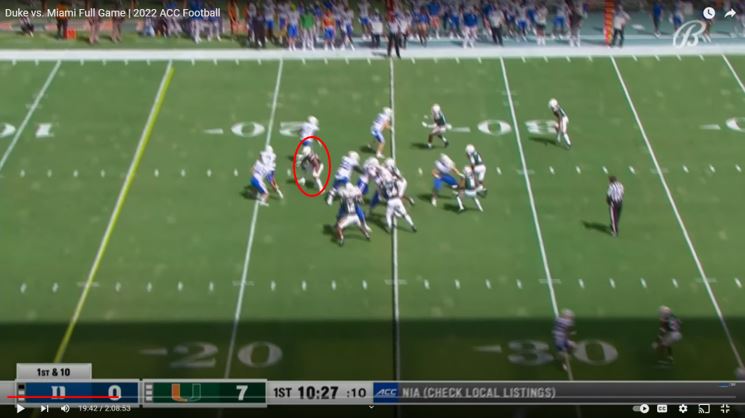 Taylor splits a double-team and gets QB to drop his eyes. He has a crosser behind him that Miami got a fumble on, but the officials blow it dead. 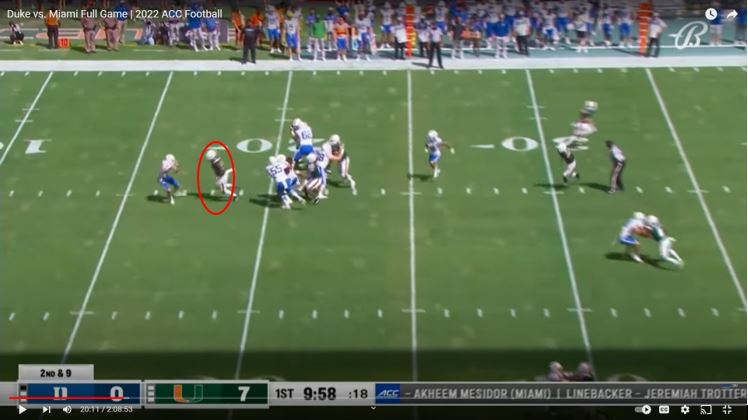 Knighton messes up his pass protection here. We pulled Scaife across to trap the edge but he gets upfield quickly. Knighton is there to chip and help, but for some reason he ducks inside of Scaife here and tries to release into a pattern. Just stick to the outside to help here and then release. TVD hits Young for a big pass, but the edge misses the ball in TVD’s hands by inches. 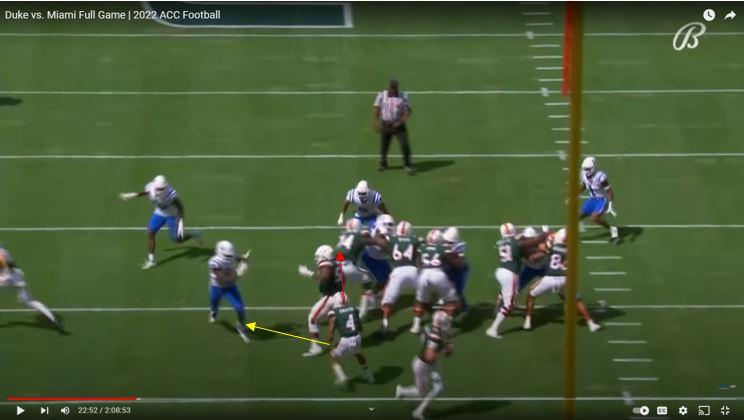 OBB account tweeted out a play where the Buffalo Bills started their C one direction and then he twirled and went the other way to throw off keys. The Bills’ OC is of course former Cane QB Ken Dorsey. I wonder if there was a little imitation here? The play is an end-around to Keyshawn, but Duke does an excellent job of reading their keys and staying home. We don’t really get the blocks on the edge and it only goes for five, but still a neat play design that could’ve popped for a big one if there was better execution. 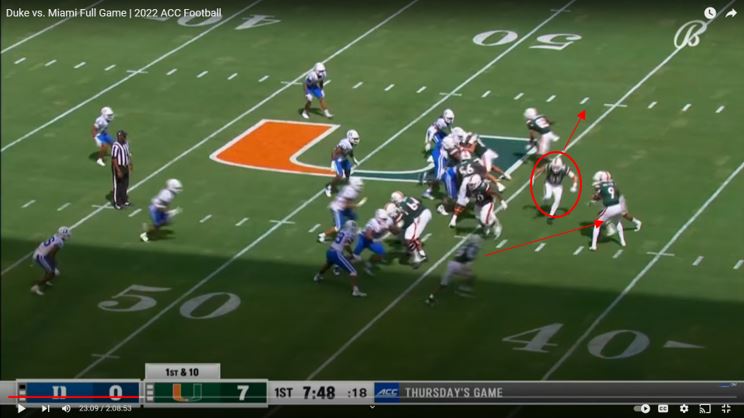 One of the biggest plays of the game here and it was a really poor run by the RB Stanley. He just lowered his head and ran into the pile, but he has a giant lane on this play and for some reason doesn’t take it for an easy first down. If Miami picks this up, goes on to score a TD and goes up 14-0, now it’s a completely different feel to the game. No idea what the RB was looking at there. 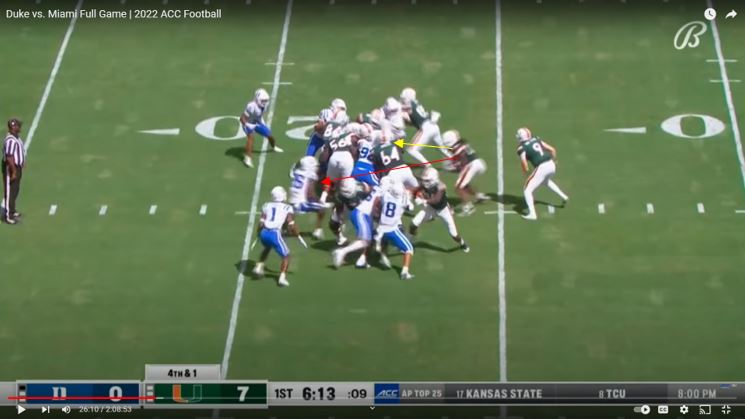 After a 1st down incompletion, Miami has all kinds of confusion in the secondary. Flagg leaves his zone at the snap and goes into no-man’s land while Smith covers the RB. Ball goes right behind Flagg on a slant. Kinchens and Couch got confused and weren’t sure who was covering their area. A real ugly show on this one. 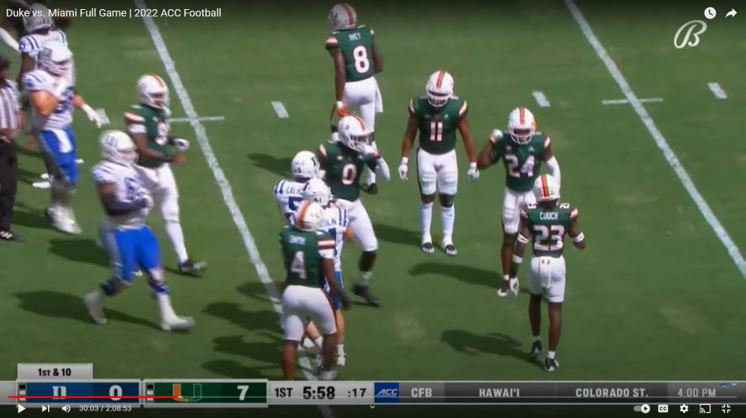 This is the Knighton fumble. John Campbell has this kind of size advantage over the defender and gets pushed back into the RB and messes the timing up. You can see how the defender has gotten underneath Campbell and into his chest and is driving him backwards. Rivers loses too quickly and lets a DT get into the RB and force a fumble from the extremely fumble-prone Knighton here. Miami conceivably could/should be up 21-0 at this point and a complete inability to execute makes this a 7-7 game shortly after this and Miami honestly started to quit after Duke tied it up. 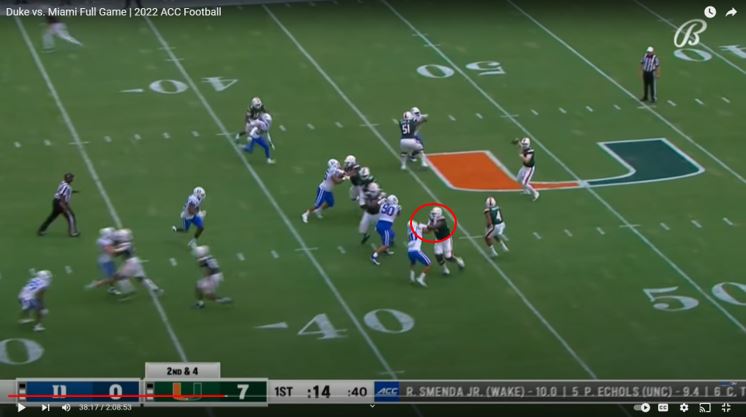 Riley Leonard couldn't stay out of the end zone 🔵😈

This game was a tough watch. Early on, Duke was getting run on and the offense had some new wrinkles in their play calls that seemed to put them on their heels. As the game wore on, the continual mistakes by the OL started to add up. This offense can score points and make plays if everyone executes their play over the course of 15 plays, but that is not a realistic ask. Miami has to find a way to scheme more explosive plays to give the threat of scoring TD’s without needing 15 plays to go the length of the field.

Defensively, Miami continues to give up a soft edge far too often. They are not nearly physical enough in their tackling at the second level or on the boundaries. Miami relies as much on the offense to make a mistake to stop them as the offense relies on perfect execution continuously.

Talent is a real issue with this roster- especially on the OL, which makes mistakes on nearly every play. At RB, Knighton is virtually unplayable at this point due to his propensity to put the ball on the ground and his desire to bounce every run outside.

LB play has elevated over last season but the lack of size and athleticism is glaring. Teams fall forward for an extra four yards on most plays. The threat of physicality and of 4-5 defenders hitting QB’s on the edge any time they scheme a QB run is not present currently.

This is a multi-year rebuild unless Miami changes course and decides to overhaul things through the transfer portal. Asking true freshmen OL to come in and start is a tall ask and Miami needs at least four new starters along the OL from this game. In many ways, I was more concerned after watching this game than I was the MTSU game because you saw players demonstrate a lack of competitive spirit in the 4th quarter and a team also with a first year HC and players that no one would argue have more talent than Miami showed more spirit from start-to-finish.