Steve Kim’s Canes Corner. They say a win is a win. And yeah, it is true that it beats losing. But Miami’s 14-12 quadruple overtime versus a struggling Virginia left you feeling as though you needed a shower — or a drink — afterwards.

Yeah, it’s good that the resilient Miami defense was able to key this victory, but the elephant in the room must be addressed.

This offense of Josh Gattis is broken.

And you wonder if the 2021 Broyles Award winner will be one-and-done in Miami. Last season, under coordinator, Rhett Lashlee, the Hurricanes averaged right around 35 points per game. Which is respectable by modern day standards, if not elite.

This season they are averaging well under 20 points versus Power Five competition.

Where have you gone Patrick Nix?

To be fair, the offensive line needs to be overhauled, there is a lack of playmakers outside, and the running back depth has been stripped bare. However, this unit just looks disjointed, and its unproductive. Beyond that, it’s plodding and boring.

On Saturday behind Jake Garcia, they needed four OT’s to create 14 points. And yes, it was tough to watch.

Earlier in this season, this unit would at least chew up yards and create first downs. Against the Cavs they netted a measly 272 yards and 17 first downs.

Jake Garcia was 15-for-29 for just 125 yards. They took a few deep shots in the first half but after that, it was a lot of dinking-and-dunking. The offense played at a slow pace and for much of the second half they were stifled. Henry Parrish was a bright spot as he rushed for 113 tough yards on 24 carries. But once again, the offense was overly methodical and could not create any explosive plays.

To be honest, Garcia, who has given this offense a jolt coming off the bench earlier this season, didn’t look like a guy ready to be the full-time starter. In fact, I’d go as far as to say that the only chance they have against Florida State next week is with Tyler Van Dyke. No, the Seminoles aren’t an elite time, but they have a productive offense led by quarterback, Jordan Travis. 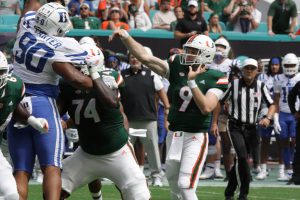 All across the country you see programs who have entertaining and productive offenses that score points and put players in position to make plays. They attract top talent from across the country. Can this honestly be said of the Hurricanes offense. There is no doubting the recruiting acumen of Cristobal, but you have to admit, what we’re seeing on this side of the ball is a tough sell.

But hey, a win is a win, they got it done. Yet this game leaves questions about the long-term vision of this offense and just who will be running it.