Last season got off to a rocky start for the Canes who went 4-3 in their first 7 games with a loss against UCF and double-digit losses to Dayton and Alabama. At first glance the ACC preseason prediction finish of 12 seemed fair, but the Canes rallied and finished the regular season 22-9.

After the loss to Alabama, Coach L and the rest of the coaching staff fully committed to going to small ball. Offensively, Miami was able to spread the floor and get whatever they wanted offensively; they finished the season 20th in adjusted offensive efficiency.  Miami would often be outsized and would get dominated on the boards, but they used their quickness to create mismatches on offense and also wreak havoc on defense by forcing TOs (Miami was top 10 in STL %.)

Health was another contributing factor in Miami’s success, the starters missed all of a combined 3 games last season due to injury. In the few years prior to the Elite 8 run Miami struggled with various injuries to starters or key rotation players.

The Miami Hurricanes advance to the Elite 8 for the first time in school history 🚨 pic.twitter.com/8BePuIDm19

Although Miami had a high firepower offense last season, their success in the tournament was largely due to their defense and elite guard play. Prior to the NCAA Tournament Miami was ranked 157th in Adjusted Defensive efficiency. After the first three tournament games Miami moved up over 40 spots to 114th. Miami took such a large leap, because in the first 3 tournament games they had a defensive efficiency of 86.50 which was the best out of any of the Elite 8 teams.

In the Midwest regional, Miami’s lack of depth got exposed when Jordan Miller and Sam Waardenburg both got into foul trouble. Miami had to try to get production from guys that hadn’t played as much in the tourney run. The season ultimately ended with a 26-point loss to the eventual champion Kansas Jayhawks. Although it was a tough loss, the season should be viewed as a great success.

Prior to last season there weren’t high expectations, Miami was even predicted to finish 12th in the ACC preseason poll. After finishing 4th in the ACC and making the Elite 8 there are higher expectations coming into this season. 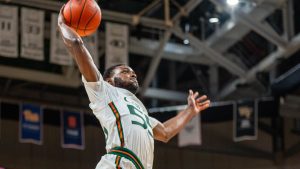 5 Out and Offensive Spacing

The personnel might be different, but Miami will look to return a 5 out offense that was one of the most efficient offenses in the country last year.  Miami’s offense was so successful last season due to their spacing and their ability to take care of the ball.

Canes fans can expect to see Miami spread the court again this season, but with new personnel I expect how they accomplish this to be different.

Waardenburg’s shooting ability as a big man was key for the Canes in being able to spread the floor so well, he shot an efficient 42% from deep. This meant whoever matched up with him couldn’t just stand in the paint.

Norchard Omier might not be the shooter that Waardenburg was, but his ability to hit mid-range shots and his constant activity should help provide spacing.  Offensively, Omier can also create his own offense by putting the ball on the floor and attacking the rim. Due to his athleticism and ability to finish at the rim, Omier will be a great pick and roll partner for the Miami guards. I fully expect Miami to use him in a ton of high pick and roll scenarios with Isaiah Wong and Nijel Pack to create mismatches and easy scoring opportunities.

Nijel Pack’s shooting ability and off-ball scoring will be huge in creating space for the Miami offense.  Pack not only looks for his shot off the dribble but uses his great court awareness to run to open spots on the floor to get his shot off. Even though Miami played a lot of small ball last season they ranked 210th in 3PT%, but the addition of Nijel Pack will drastically improve that number. In short, whoever guards Pack has to constantly stay close to him on the floor, which creates space for everyone else.

Nijel Pack and Norchad Omier led their respective teams in scoring last year and should help alleviate the scoring void left with Mcgusty, Moore and Waardenburg leaving. Jordan Miller should have an expanded role as well, he ended last season hot averaging an efficient 14 PPG on 65% FG%. Miller wasn’t a huge focal part of the offense last season, but the team was 15-2 when he scored double digits. Coach L has praised Jordan Miller for his play in the offseason and his improvement with shooting three pointers.

Ball security was a huge key to success last season, and this should be the case this season as well. Nijel Pack, Jordan Miller and Isaiah Wong all ranked top 5 in TO Rate% last season in conference play, even with different/expanded roles that trio should still be elite with taking care of the ball.  Bensley Joseph had the highest TO Rate% on the team last year as a freshman at 24.5%, but I expect this number to be cut by a decent margin.  There is also an argument to Miami improving these turnover numbers because the team has a full offseason to practice the small ball system.

Miami is going to be smaller, but harder to guard this season with Arkansas State transfer Norchad Omier at the 5 versus last year with Sam Waardenburg. And Wooga Poplar? Add him to your breakout list ASAP.

Miami’s offense should be just as good as last year, but it could be even better. One major factor is what kind of production Miami can get from Wooga Poplar, Bensley Joseph, and Anthony Walker?

A projected starter, Wooga Poplar has definite hype surrounding him going into his sophomore season. Wooga admitted himself that the game was a bit fast for him at times last season. Isaiah Wong and Jordan Miller both spoke about Wooga’s improvement over the course of the offseason and how it would surprise fans. In transition, Wooga is going to be an electric player to watch due to his athleticism and length. If the sophomore can consistently hit his jumper and create driving lanes the Miami offense will greatly benefit.

Defensively, Bensley Joseph is always going to make an impact, but he should contribute more this season offensively.  Based on a recent twitter video, Joseph has seemed to improve his shot form and quicken his release. Joseph should be able to contribute more as a playmaker and slasher in his second season.

Anthony Walker mainly got minutes at backup center last season due to the shift to small ball, but Walker is rumored to have improved his 3PT shot. If Walker can consistently knock down threes, he could potentially get a boost in minutes. 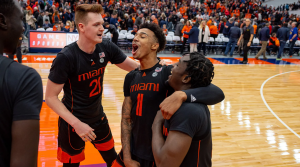 Coach L relied heavily on the scramble defense last season, due to Miami being smaller and quicker than their opponents.  The scramble defense is a man defense with a diverse set of trapping principles designed to generate steals and take opponents out of their offensive rhythm. Defensively, Miami wreaked havoc on opposing teams and ranked 10th in the nation in steal %.

Charlie Moore was fantastic last season at pressuring the ball handler full court and getting steals, but there were times where Moore and even McGusty would gamble on steals. If not successful, it would lead to a defensive breakdown and an open layup/dunk for the other team.

Nijel Pack isn’t the same on-ball defender as Charlie Moore, but he has great awareness and instincts on defense. I think we will see the Miami guards take slightly less risks while guarding the ball and playing the passing lanes, but we will also see less breakdowns leading to open dunks/layups.

Rebounding was the main area the Canes struggled last season, but this shouldn’t be surprising considering the team was outsized in practically every matchup. Miami was one of the worst teams in the country in terms of giving up offensive rebounds, but they did add a great rebounder in Norchad Omier. Norchad will alleviate some of the defensive rebounding woes, but ultimately Miami is going to give up offensive rebounds playing small ball. Omier does also have the ability to switch onto guards as well as the strength to battle down low with post players who are half a foot taller than him.

I expect this team will be better on the defensive side of the floor due to better/more depth and because of the versatility that Norchad Omier brings.

We are about to do BIG things!!

Barring any significant injuries, the absolute floor for this team should be a top 40 team that makes the tournament. In a very top-heavy ACC, I see no reason why Miami can’t finish top 3 in the ACC, make a deep conference tourney run and get a high seed in the NCAA Tournament.

Expect to see a roster breakdown hit the legend soon, the tournament starts in March but the madness that is college basketball has begun! Go Canes!