That could’ve gone better. On a day when the Miami Hurricanes’ football program saw their fan base come out and support them in droves, the team itself seems to have gone off to Club Liv rather than Hard Rock Stadium. How did it look on film? Well, it looked pretty terrible, but here we are anyway. Fair warning: if you’re looking for a happy review, this is not the one for you.

Live I thought this was a poor call, but Flagg gets there half an hour early for some reason. The Canes have this play blanketed and should be off-the-field with a three-and-out, or really, Couch should intercept this ball. 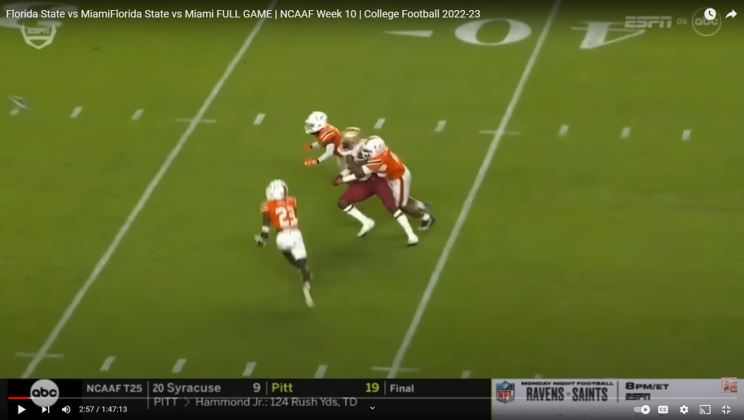 You heard Coach Steele say after the game that Ivey was supposed to have safety help deep and the technique he was playing was intentionally in trail. It’s fine to say there should’ve been safety help deep, but why is Al Blades into the game on the first drive in that situation? Was there an injury to the starting safety? You routinely see NFL safeties play every snap of the game, so I do question having a safety rotation given the number of communication issues we have seen in the secondary on deep passes. Blades jumped an underneath pass on 1st-and-5 and lost eye discipline. This is common for CB to S converts, as they are used to moving forward and having eyes on receivers in front, rather than moving backwards and keeping deeper than the deepest. 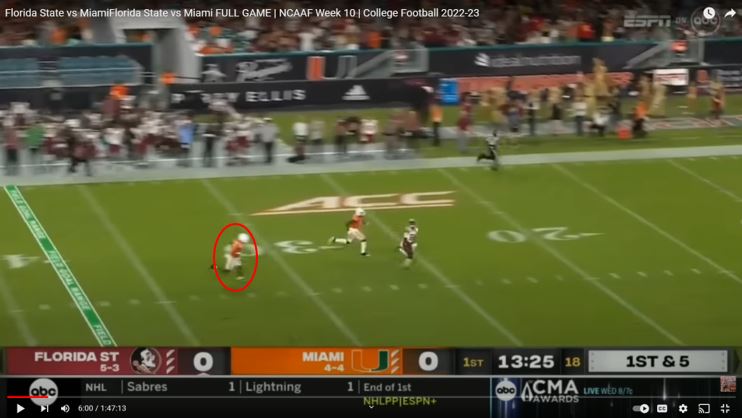 On most plays Miami runs there seems to be an issue with execution and the first play of their drive was no different. In college you can block when the ball is behind the LOS and this is a swing pass to the orbit motion all along. You can tell by how everyone is blocking immediately everywhere but Ladson. If Ladson just blocks his guy this is an easy nice pickup. His defender runs right by him and trips up Brashard. 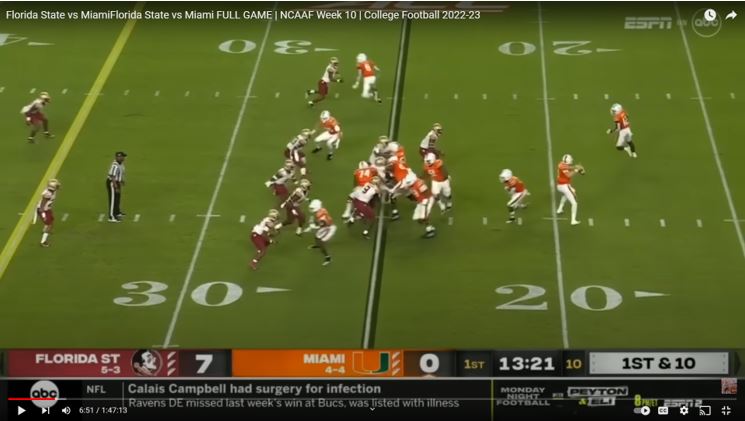 I’m not really sure why you would design a bunch stack with your WR’s and then run them into the exact same area. Redding is held here or the two WR’s are in the exact same place on this one as the ball is thrown. 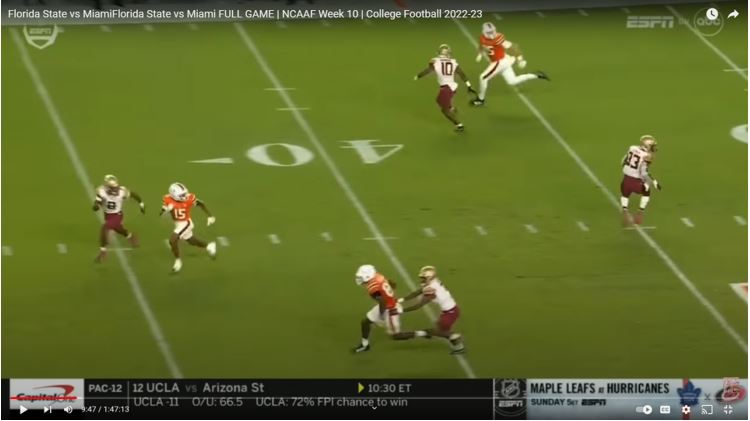 This one is tough because it’s a bit of a scramble drill and you know TVD’s eyes are going to go to his security blanket first in Restrepo, but this is a tough throw and he far overthrows it (stop overthrowing deep balls). He has Mallory on the corner route in front of him and not having to throw back across where he could lead him for an easy 1st down and maybe a TD. We didn’t know it at the time, but this is the last points we would score after the FG. 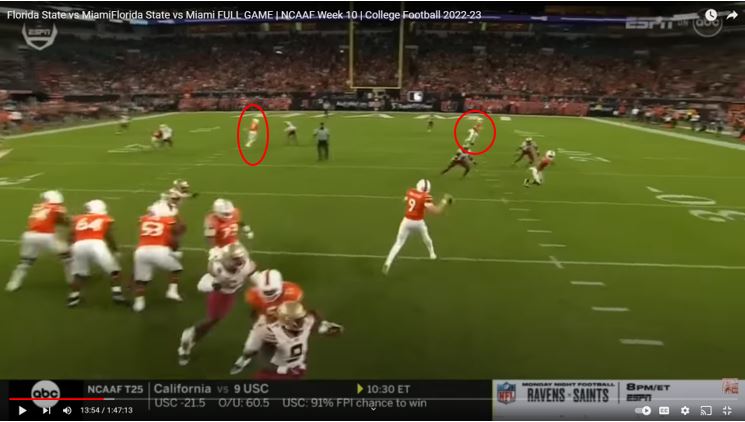 It did not take Florida State long to realize that the 3T was going to jump the gap and the edge was going to get wide and no LB would replace outside. They ran counters and traps all game long it felt like. Here, Leonard Taylor gets trapped, Mesidor gets pushed wide, LB’s get crunched on the edge. Easy money. 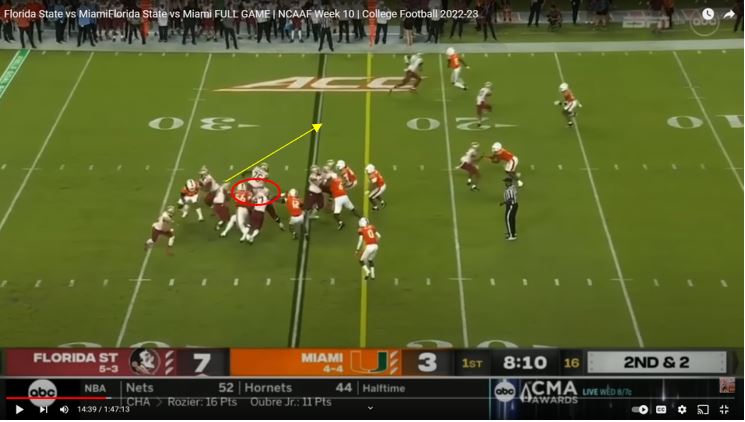 On this 3rd and short FSU does something that I wish Miami would teach, or develop, or execute (whichever reason is why they’re not doing it). You see the DT is pulling 53 into him, rather than actually trying to beat his block. Why is he doing this? To prevent 53 from getting to that Mike LB who is in the gap to tackle the RB. This play is blocked up perfectly if Clark gets to that second level, but because the NT was unselfish, the MLB makes the play and somehow stops this from being a 1st down. This play also highlights Miami’s need for a RB who falls forward on contact and not just the scatback types. Brantley is one of those players who will sacrifice and do the little things to win games on this roster. He’s so adept at that wham block (or trap block) coming across on the edge. Miami punts and then gets a delay-of-game. Woof. 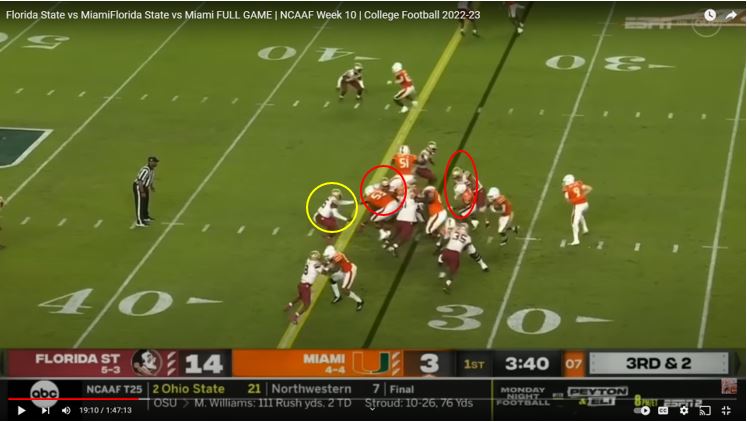 As you heard Coach Steele say after the game, FSU ran this play or a variation of it on almost half of their plays. The LB play was the reason why. A counter play is just what it sounds like, the keys run counter to what is typical. The goal is to get the LB to take false steps and move himself out of position as he follows typical keys. It worked against Miami repeatedly. You can see the Mike is already leaving his gap before the RB has even declared his path and it’s an easy burst right where the Mike left. 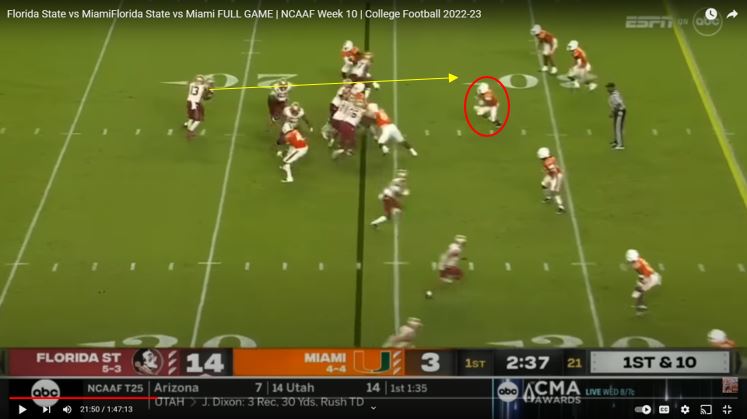 Agude could get him down to bring up a 3rd down, but instead is trying to tackle the football and doesn’t get him down here. The other problem is it is almost always one defender trying to make the tackle instead of a gang. 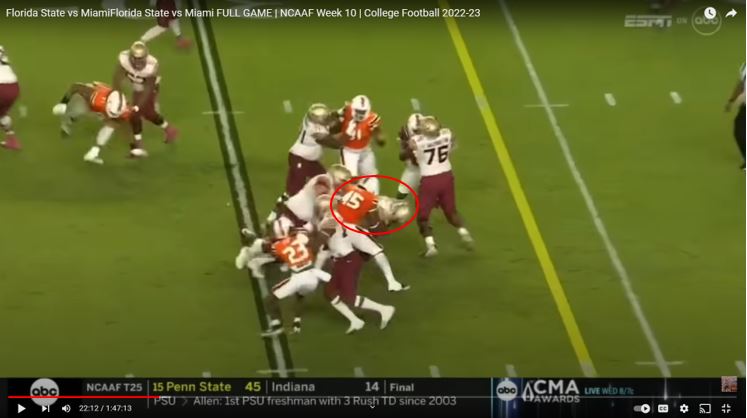 Next play, Agude chases the RB instead of keeping his edge. Then Caleb Johnson misses a tackle. Easy 1st down for the QB. 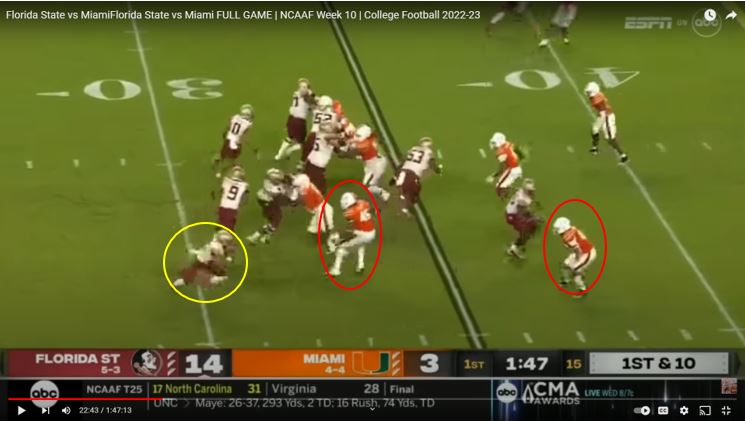 LB’s are confused on most every play. Bissainthe was hesitant, but did make a shoestring tackle. Then he walks to Keontra to discuss what was happening. 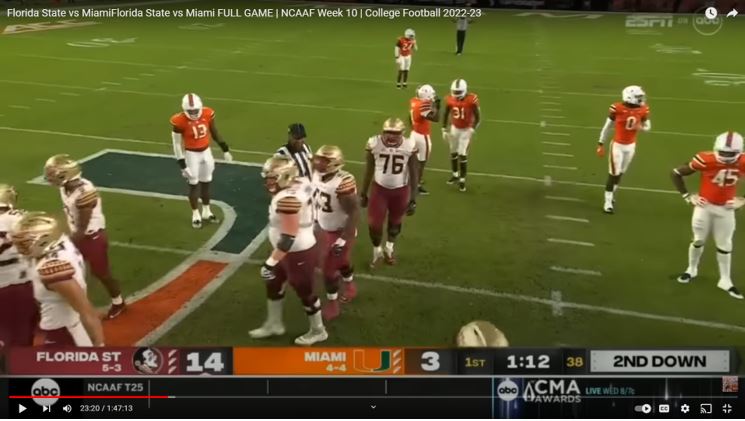 It’s difficult to do it justice with a still, but this is a pretty impressive play Bissainthe. He mirrors the flow of the RB, stays outside to maintain leverage to the edge, then avoid the pulling G, jumps into the gap and stacks up the RB for no gain. Nice job by Agude to actually set an edge on this play as well. 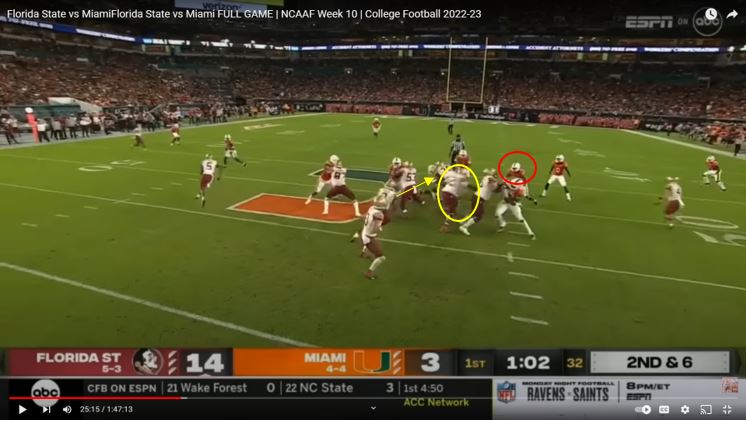 I’m not going to highlight it every time it happened, but just know this was a recurring theme on 3rd downs as the DL simply refused to maintain gap integrity on rushes. It starts with the NT. You cannot go outside on this play, you have to stay in the A-gap. Travis likes to attack the A-gaps on his scrambles from the pocket and that means the NT has to anchor and pinch the pocket, rather than trying to be a penetrator and get upfield. Taylor also goes outside and this is easy money for Travis. I blame the 3T less, because he wants to get pressure, but you still have to maintain discipline and you can see that Mesidor over LT is the only one who does. The RB drifting as if he’s going into a pass pattern got Bissainthe’s attention and it was too easy. To me, you’re playing too deep on a 3rd-and-5 and there just isn’t enough here to stop them. 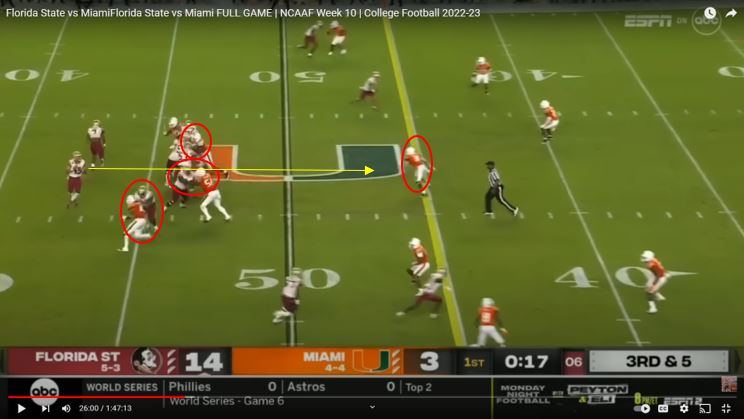 Flagg makes a mistake here. He’s the force player and has the B-gap. He tries to duck back inside of this blocker instead of attacking the outside shoulder and forcing a RB back into his pursuit. The coaches will talk about this in film. This run goes inside the 20, when it should be about two yards. 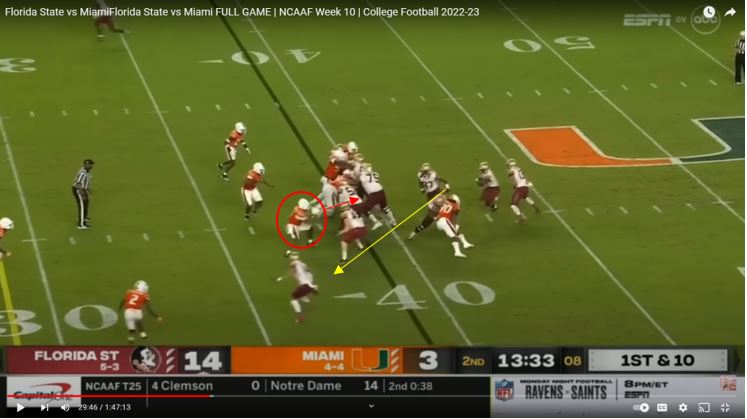 Miami got demolished at the LOS on this play, but had an extra defender in the box in James Williams. Keontra has him stopped right here. James Williams is trying to go head-up with an OL instead of using athleticism to beat him to a spot. This run goes for a TD. 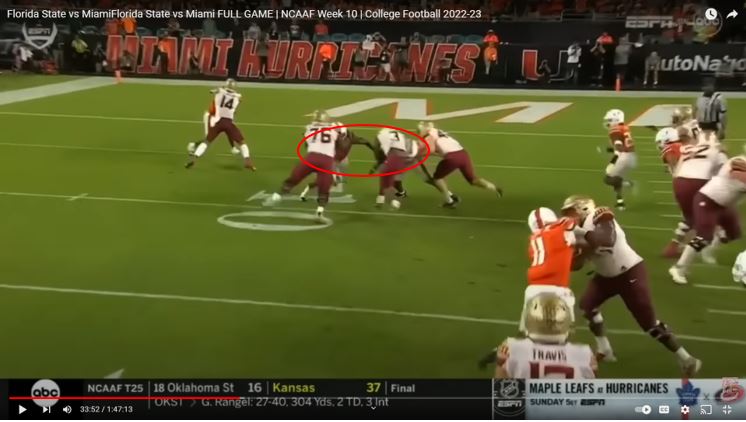 This is pretty much the story of the game. 1-on-1 inside FSU manhandled the DT’s of Miami. #6 getting blocked with a snatch and grab by a single blocker. Taylor is flatbacked and walked out of the hole by a single blocker. T gets to frontside LB and washes him out. Frankly, this is what Mario wants his team to look like on offense. 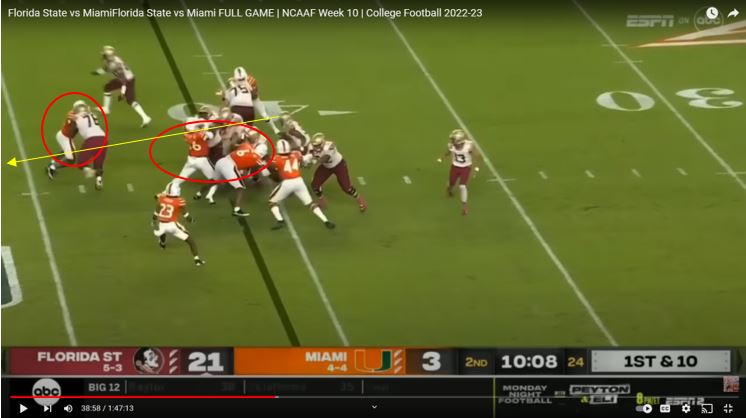 Noles get a big win over rival Miami. @FSUFootball | #ACCFootballpic.twitter.com/H5XYcaRxPH

This was a wonderful play by Ivey.

You can watch our friend Roman break it down on his YouTube series Student of the Game. And go further into a few plays of the game on X’s & Ro as well.

This was a clinic in what it looks like when one team is able to execute their tendencies without their opponent being able to do much to stop it. On the other side of the ball, you were able to take the tendencies of the offense and exploit it with your defense. FSU came in understanding what Miami wanted to do on both sides of the ball and overwhelmed them.

Defensively, Miami couldn’t stop basic football plays with physicality. At that point, it doesn’t matter much what the coach calls if LB’s will not stay in their gap and make a tackle. It doesn’t matter the defense if your NT and 3T will not anchor and push the pocket rather than run themselves out of their gap all night long.

Offensively, it was a different story. I felt like there were some questions to be answered. Starting with why was TVD in the game, as he was clearly not right. Jake Garcia against a zone defense seems to be an issue. WR’s couldn’t separate against man cover when they did see it.

This game was won and lost at LOS and you can see the distance Miami has to go to get back to relevancy there. It also appeared as though players were not interested in making winning plays like the players for FSU were. You need players who are willing to make a block, hold off blockers so others can make a tackle, or score the TD, or get the headlines. Additionally, the Miami players simply couldn’t line up at times.

Hopefully, this game is the beginning of the changes necessary to get back to relevance, but the road to glory is paved with hard work.