In a season that hasn’t gone according to plan, Coach Cristobal and the Hurricanes took their banged up squad on the road to face a program that has already fired their head coach this season in Georgia Tech. Playing in front of dozens of fans, Miami pulled out a victory. How did it look on film? Well, a lot better than last week.

Immediately you can see the loss of Jalen Rivers being felt at LG as he is beaten quickly on this 3rd down play. This was a good run by Knighton to avoid the DT in the backfield, hit the hole on the other side of Cooper, and then avoid Jakai Clark who misses his block, then tries to pirouette and come back. For me, I would like to see our OL make this block horizontally to really use leverage to move a player, then plant on their inside leg and go vertically to the second level (in a straight line off the block). 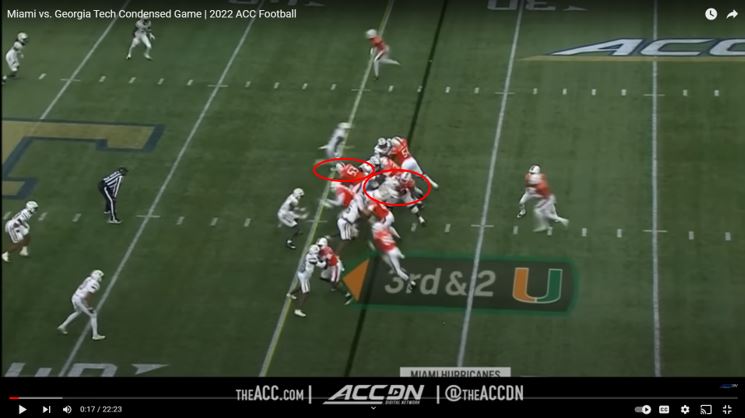 Again, you see the LG is struggling to hold the point. Here, he is what I call a waist-bender, where he isn’t bending his knees and instead is leaning. That always cost you power, as your base is where everything begins. Knighton does a nice job of taking the cutback and Mallory seals it well to pick up a 1st down. The LB here is not flowing to the cutback lane for two reasons; he’s reading the mesh to see if the QB pulls it for an RPO slant, and he’s focused on the QB run game. 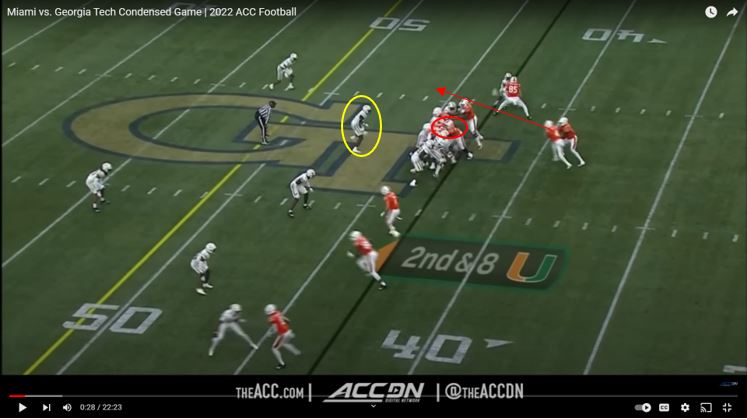 Here you have orbit motion and trying to get Brashard the ball in space. He’s responsible for beating the unblocked edge and he does. Knighton is the lead blocker here, Mallory does a nice job of sealing the LB. That’s two solid blocks for him already, which might be the most times I’ve written that already. Notice how Campbell crashes the end inside then squares up to get to the backside LB at second level. Much better than Clark earlier. 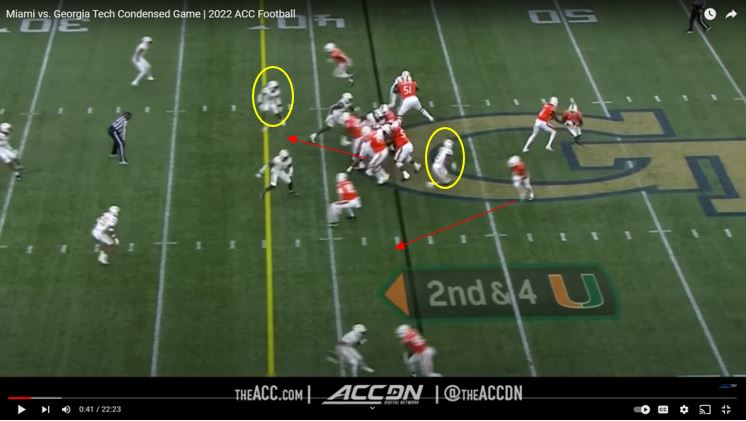 50 comes across and has a trap block on the edge coming upfield and tries to just lean on him. There is no power in this contact. This is the TD to Mallory and thankfully they didn’t cover him because 50 doesn’t do much for his QB. This technique is not going to work against P5 defenders. 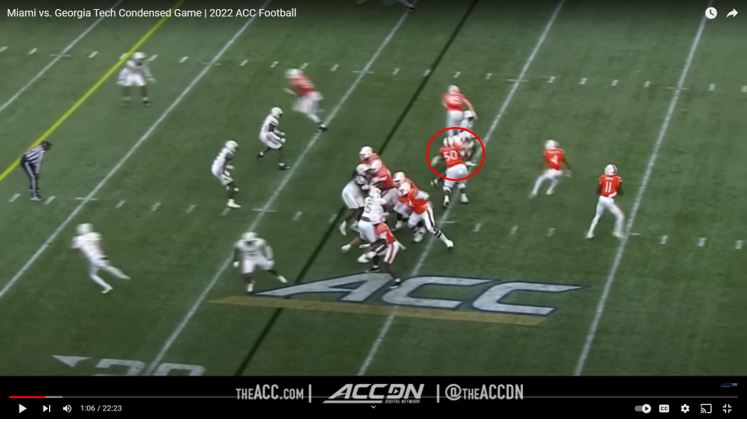 Teams go into zone so they can have more eyes on the QB and have more chances to carry areas that the offense wants to target. Here, Flagg is clearly uncomfortable in zone and has eyes on a crossing receiver. He doesn’t realize the ball is being delivered to this receiver or he would have an easy pick. If you want to transform this defense, one of the main things you can do is find an impactful MLB. 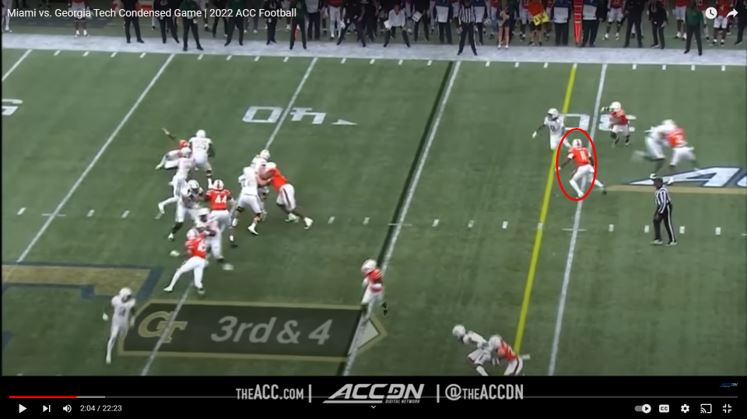 First of three Kam Kinchens interceptions is a sign of growth from him. He has had issues staying deeper than the vertical receiver in cover-2 this year, mainly when teams go to a dig/post or post/vertical concept on the outside and Kinchens wants to jump the in-breaking route over the middle. He protects the vertical and is there for an acrobatic interception. (Not shown)

As he develops, Brown will learn when to take off and try and make a play with his legs. Would’ve liked to see him take off here and try to pick this up with his legs instead of trying to throw it short to Young, who was covered. They ran mesh on 3rd-and-short, like they normally do, and the middle mesh came wide open a second later. This will be part of Brown’s development as a passer and just having reps on film will do wonders for him. 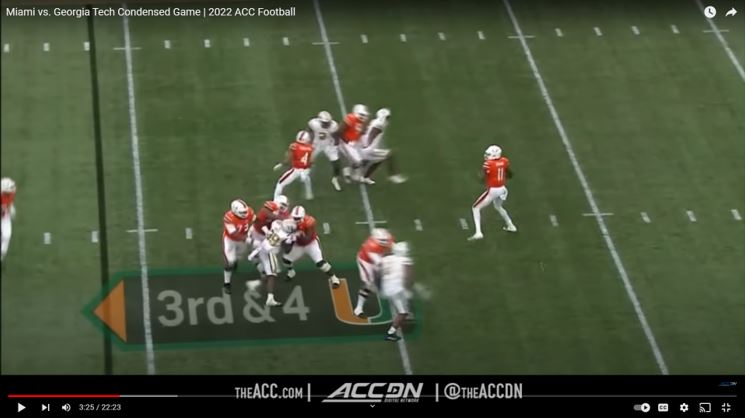 To illustrate why Miami struggles so much on A-gap runs you can see the 3T Leonard Taylor is bullied several yards downfield by a duo block, Flagg loses sight of his gap and is tentative, rather than attacking the play. He’s actually playing patty-cake with Taylor. This goes out the gate for a big run. Getting a DT who can handle a duo block and anchor is a priority for this defense. The hope was that Darrell Jackson would be this player, but he’s been more of a penetrator who use length and quickness to make plays rather than a stout anchor at 0T or 1T. He played 3T at Maryland, so the projection to NT hasn’t really played out as hoped thus far. 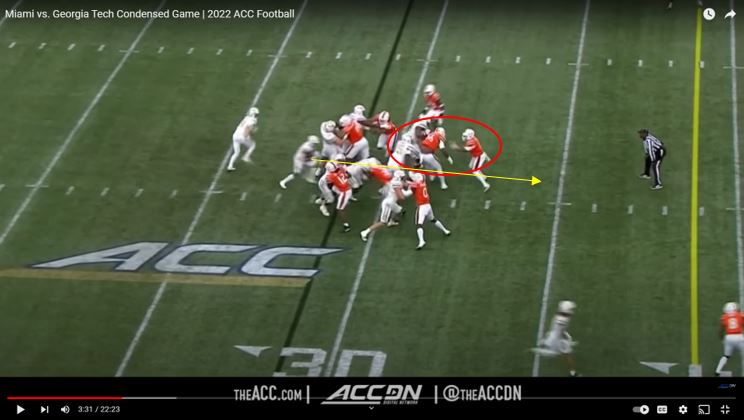 This is what Taylor does best, not anchoring. He beats the G with a quick rip move and forces the RB to bubble for a TFL. 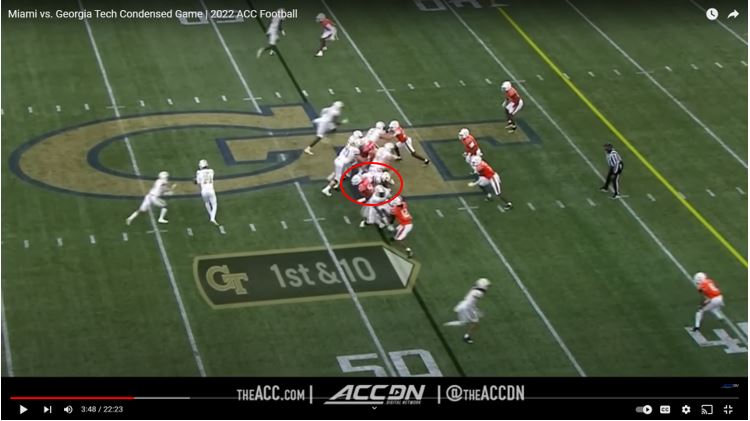 By far, the best QB spy we have employed this year has been Jahfari Harvey. He makes the play here to stop a 1st down. 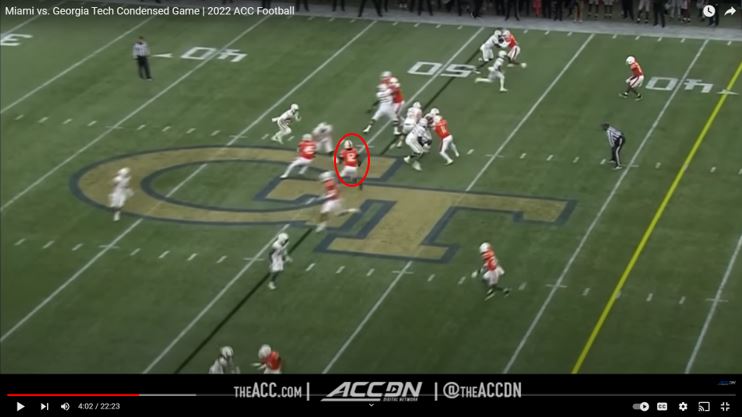 There is some definite fear of what is going to happen against Clemson if 50 doesn’t improve quickly. He gives up pressure right at the snap and is already beaten here as he almost falls over due to his weight being so far over his toes. This is the TD to Skinner. 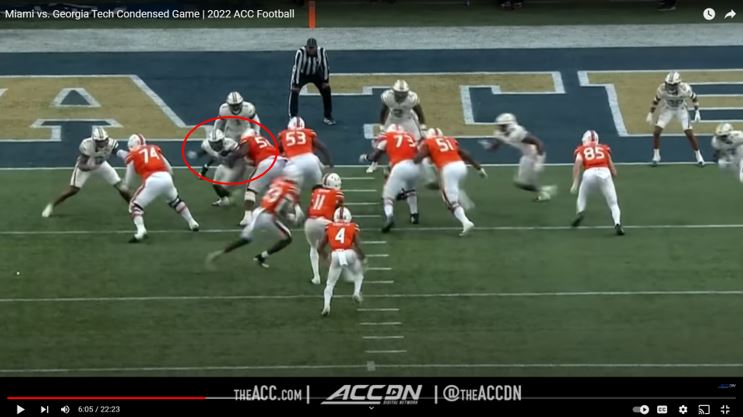 I like seeing a DE crash on a TE trying to release into a pass pattern, but you’ve got to bang and then get out to set your edge on the read. Chantz Williams engages for too long and the QB pulls and gets the edge. 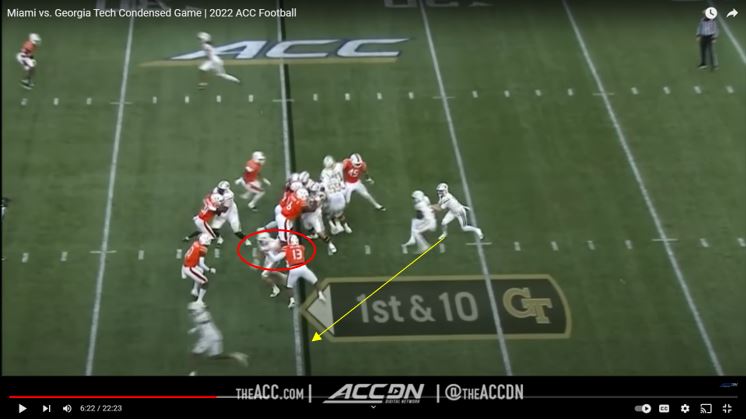 Antonio Moultrie hasn’t played a ton of snaps this season, but if he’s going to shock OL backwards like this, he should get more time. Gets under the OL pads, disengages, makes a TFL. 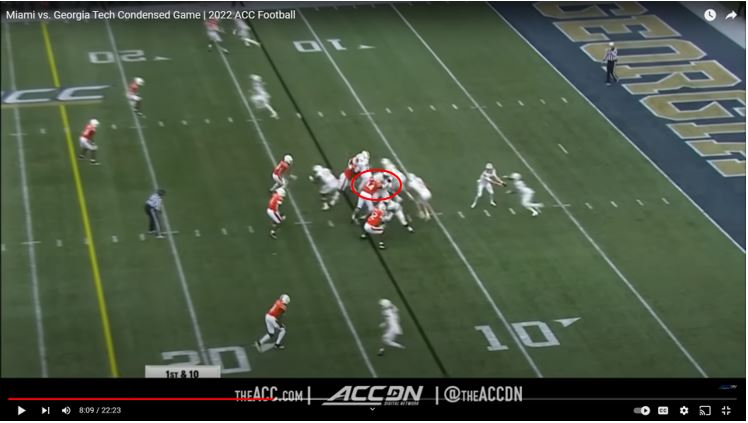 This is the play that Cristobal lost his mind on the sidelines. This is legitimately teaching tape for an official on what holding looks like and how it impacts a play. QB gets outside on this one and makes a big play. 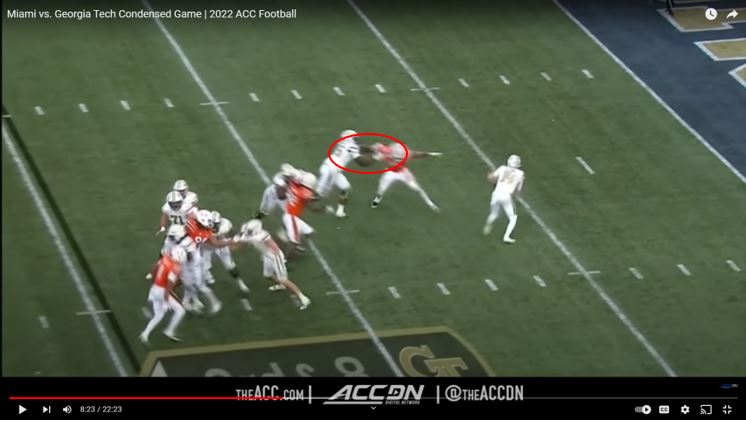 Two plays later the RT puts his hands inside his jersey and pulls him to the ground. No call again. Miami LB’s lose their eyes again and the RB leaks out and no one picks him up for a 1st down. This drive ends in a TD and the officials played a huge role in that happening. 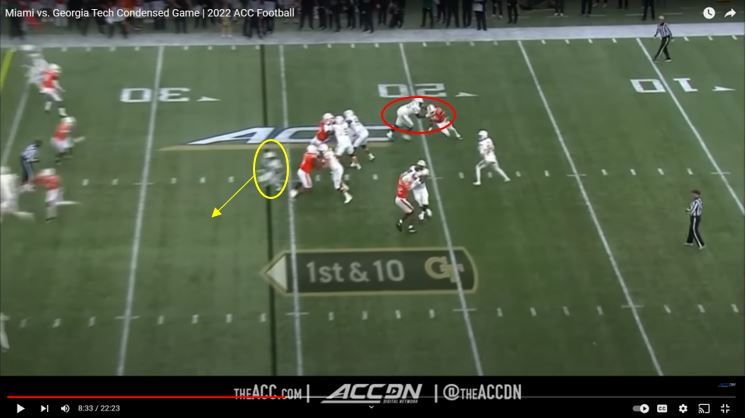 Keontra Smith overstepped his leverage due to the motion and left his backside gap unprotected. Easy first down run on 3rd. 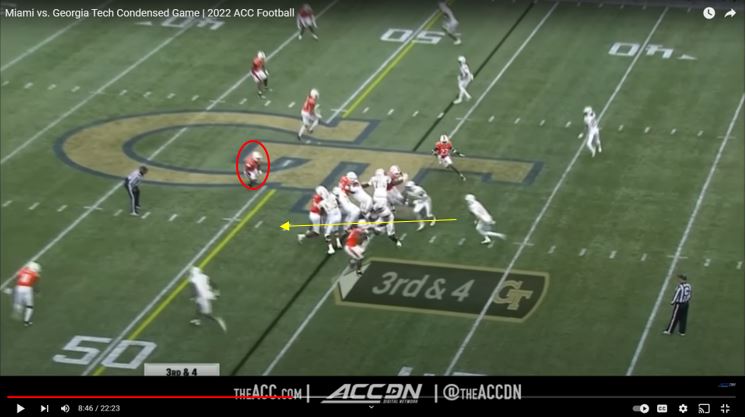 Wesley Bissainthe drew praise from the coaching staff after this one and you see him do things that other LB’s have failed to do this season. He identifies the RB releasing and is flowing to him quickly. As soon as the QB drops it off he uses his speed to run this down for a one-yard gain. 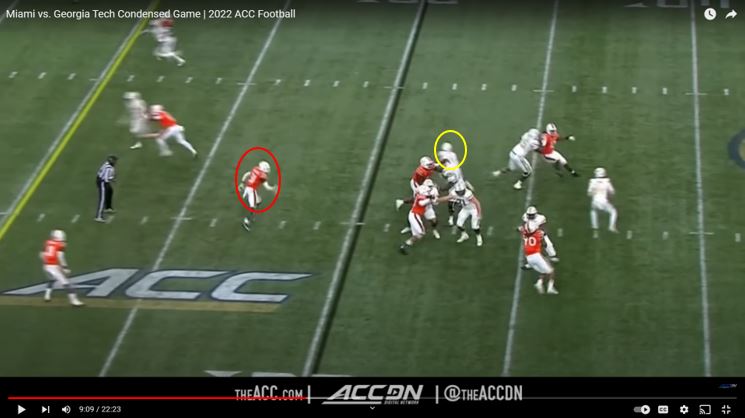 This was a nasty route from the WR. He ran slant-corner and Stevenson stuck with him the entire time and was right there for a pass defensed, but it was a perfect throw and excellent catch. Hat tip to them on this one. 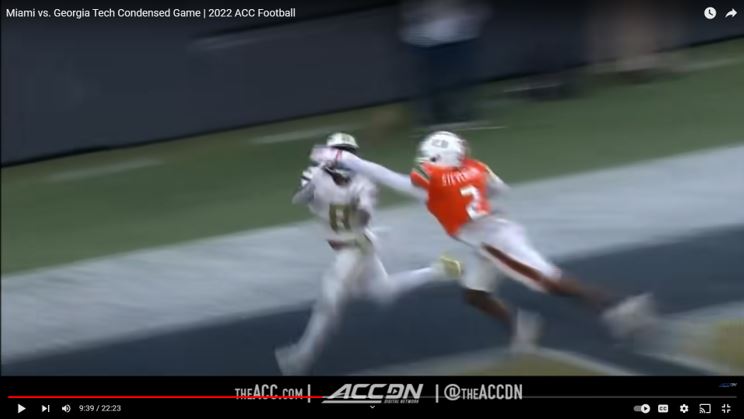 Miami runs a tampa-2 on 3rd-and-long and forgets the shallow drag. Luckily, the QB tried to fit it into a deeper window because this popped wide-open for an easy first down if he dumped it off. 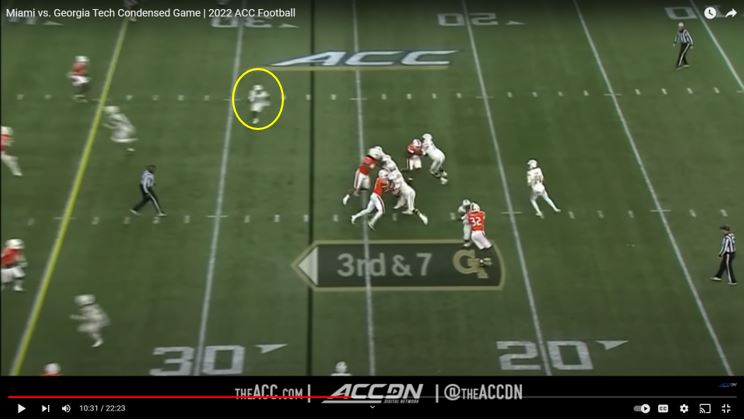 Big play out the gate to McCollum, but Miami has it stopped if Caleb Johnson makes a tackle. MLB has been an issue all year. 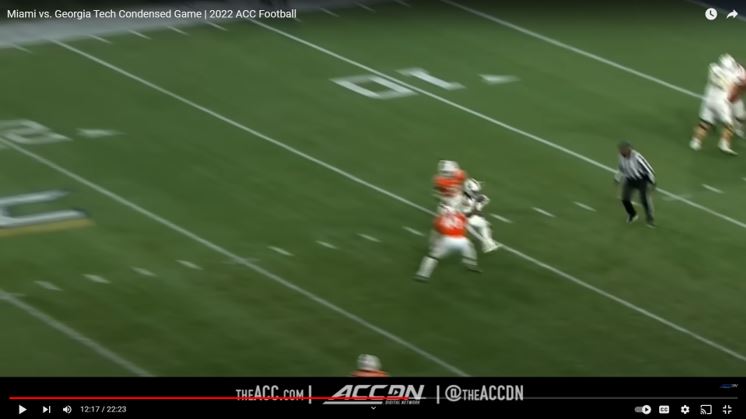 This is poor technique from Flagg here. He looks like he’s doing a wall squat and is clearly on his heels. You can see the RB is a lead blocker on this QB run and Flagg needs to blow up this blocker in the backfield and limit the running lane for the QB. Instead, he’s tentative and then misses a tackle downfield on top of it. 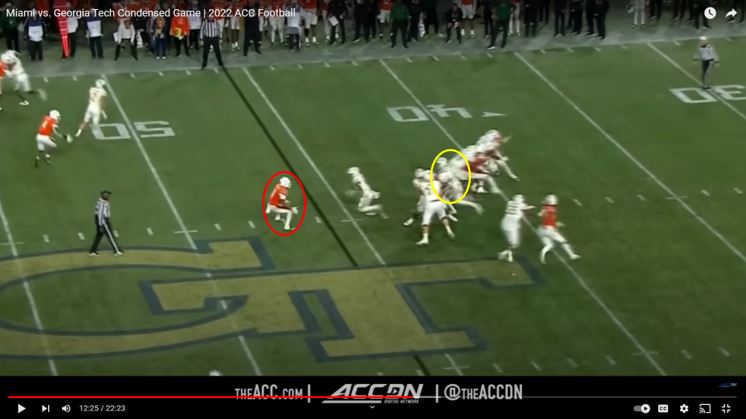 It hasn’t been the explosive pass rushing from the edge, but I’ve been impressed with what I’m seeing from Chantz Williams on the edge in run defense. This is an excellent job of having heavy hands on the edge to attack the dive first, then coming off the block when the ball is handed off and making a TFL on the RB. 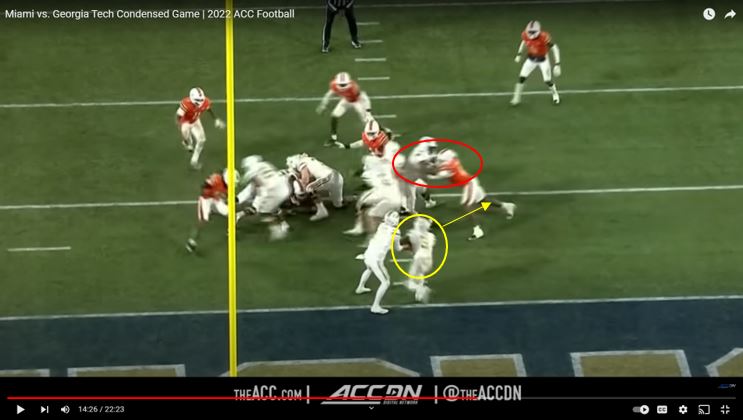 Jakai Clark gets ragdolled with one arm on this one. That’s what happens when you let someone get under your pads. Where Jacurri Brown brings something that other QB’s don’t for Miami is that Jacurri gets out of here and goes down the sideline for a big gain. Cooper hit this guy once, but I would’ve liked to see him bury him from the side. 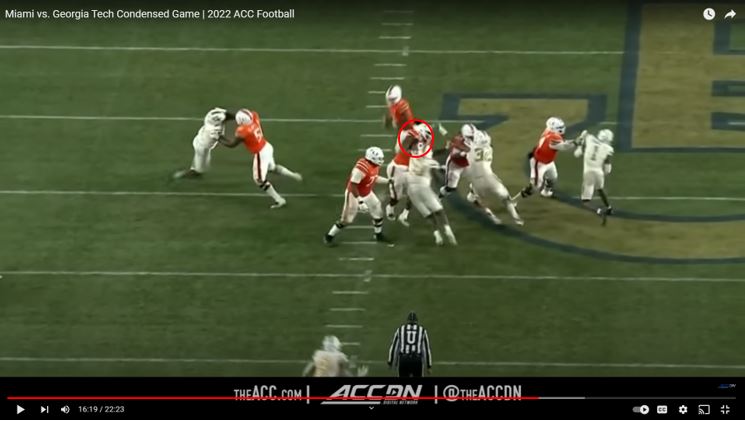 Loved seeing Bissainthe recognize a drag coming across and level it. He knocks this WR behind the LOS and essentially removes this option as Agude gets home. 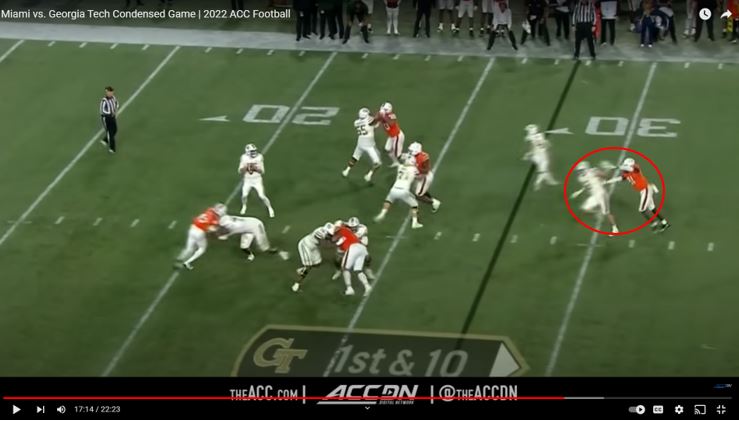 We’ve seen instances of Kinchens taking coaching in coverage, but here is an example of coaching showing up in a player on a run play. Kinchens’ job here is to set the edge and be a force player. You see his body angle is 100% set on getting wide of this player and not letting him outside. He’s not running to where the player is at, he’s running to where his job is to be. Because of that, he beats this block outside, turns the RB back inside to his pursuit, TFL. Do your job and rely on your brothers to do theirs and good things will happen. Flagg beats a backside block, pursues it as he should, makes a good play. 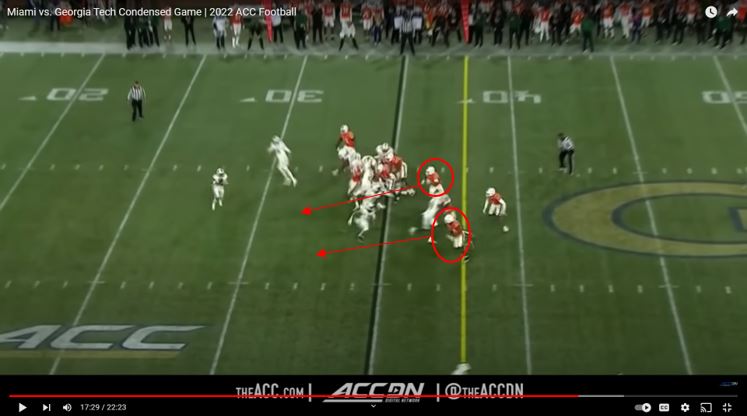 Offense should’ve picked this up. Too easy on 4th down, but thankfully the QB was late and off-target. Flagg is just so uncomfortable in zone that he almost does a good job in coverage by simply making the WR avoid him. 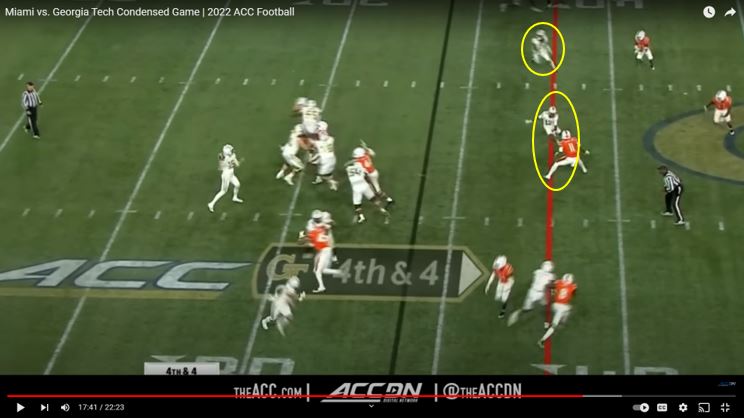 Miami cashed in the good field position with a rushing TD and the game was over.

In his first career start, Jacurri Brown was responsible for 3 touchdowns in the 35-14 win!@CanesFootball pic.twitter.com/8s84GCr0GK

There were more good things on film this week than most weeks and it was good to see the effort is still high for this team. A particularly positive revelation was the bounce-back for Knighton, who is running with improved vigor and patience. A criticism I have levied at him for a few years is his inability to press a hole and cause a defender to declare. Instead he tended to want to get outside immediately. He’s been much better with that recently and the results have improved. Not fumbling the football is a big help as well.

Anez Cooper is starting to look like a building block on the OL as he reshapes his body and improves his flexibility.

Brashard Smith was able to make plays with the ball in his hands and is fulfilling some of the promise seen in him early in the year. As he’s become comfortable in his role he’s playing more free. He’s not an outside WR who is going to be a route technician at this stage, so it’s been a positive sign that the coaches have found ways to unlock his skills.

Jacurri Brown continues to show flashes of a college freshman Lamar Jackson starter kit. To be clear, that Lamar Jackson was a far cry from the MVP version in the NFL today, and I saw some reasons to believe that Brown can be dynamic if he continues to develop his passing skills.

Kam Kinchens got on my radar by trying to do things that were not his role and allowing some big plays. He’s taken to coaching and now is making plays in the defense.