It is OBB Game Time Miami Hurricanes at Clemson. In a tale of two worlds, the Clemson Tigers are upset a two loss Alabama team is ranked ahead of them in the latest College Football Playoff Rankings. The Hurricanes are happy with a win over downtrodden Georgia Tech and wondering how to achieve bowl eligibility.

The all time series between the Miami Hurricanes and Clemson Tigers is tied at 6 wins. The two ACC foes have faced off a total of 12 times and Clemson owns the largest margin of victory at 58-0 accomplished in 2015. The longest win streak is also tied between both schools at 3.

One day closer to kickoff…

What are your thoughts on the Clemson vs. Miami spread? 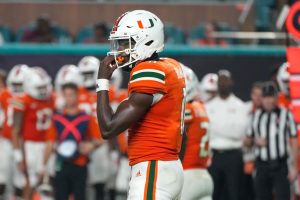 Jacurri Brown getting ready for a play

Clemson with a 87% Chance to Win

GIVE ME THE KEYS – OBB GAME TIME- MIAMI HURRICANES at CLEMSION

Do Not Get Blown Out. The Miami Hurricanes are 19 point underdogs. Woof. The season has not gone to plan but you cannot let the Tigers put an emphatic exclamation mark on you. When the Hurricane lost 58-0 in 2015 that loss multiplied. It was not just one L in the record book but a constant reminder how bad the Miami Hurricanes program was. Dabo Sweeney has no problems running up the score to remind the new Hurricane Head Coach whose conference it is.

Limit the Frenzy Plays. This was a a key in the Texas A&M game. Memorial Stadium is the closet to an SEC environment there is. The defense has to limit the big play in its entirety. FSU was able to manufacture one on the opening drive and instantly deflated the Hurricane crowd. Inversely, if you let the Tigers hit big shots it will be a long day at the office for Kevin Steele and company. A hometown crowds feed off energy. Big plays are its food.

Anticipate Clemson to Limit Jacurri Brown’s Running Abilities. They will crash the mesh point and the Tigers will blitz. Defensively they will force you to play the way you do not want to play. I can promise you watching the film the last time the Hurricanes ventured up to Death Valley, they did exactly that. Sweeney’s analysts are top notch. Be aware of your tendencies and try to break them this week. Find answers early because if you do not, read key number one again.