The Canes look to start a winning streak as they come off their best performance of the season in a 35-14 win in Atlanta against Georgia Tech. The Canes came out strong for a change in the first half and looked to roll, but the conservative game plan kept Georgia Tech at an arm’s length until Kam Kinchens decided to go off and aid the offense in dismantling a bad Georgia Tech team. A win is a win and it’s a step in the right direction. In typical Canes fashion, it felt good to be the villain and get it done on the road.

So here are five ways Miami can improve from Week 11 against Georgia Tech to Week 12 against Clemson.

It isn’t shocking to any Canes fan who has watched the team this season that the offensive line has been a weakness yet again (someone check in on Coach Mirabal’s arms and legs). In addition to the lack of pure talent, there is not a lot of depth either. To make matters worse, the injury bug has plagued the offense and, in particular, the offensive line.

The potential starting group of Zion Nelson, Jalen Rivers, Jakai Clark, DJ Scaife, and John Campbell, Jr. never materialized this year. Despite performing rather well against the talented group at Texas A&M (which has massively underperformed this season), the ante gets upped against the Clemson Tigers.

#canes have been victimized with enough db blitzes on the year. But my goodness did the Hurricanes Offensive line pick it up perfect this time.

I'd like to report an ASSAULT to the @OBBPD911

Also Jacurri Brown is an eraser. If a play isn't there. He can create for you. pic.twitter.com/Y6w6zmYkKk

This defensive line group is equally as talented as the group in College Station (3 of the 4 starters on the line were consensus 5-star recruits), and their performance matches the talent. This defense currently holds teams to 111.6 rush yards/game, averages 2.7 sacks/game, and 7.9 TFL/game. The defensive line group at Clemson is as dangerous a group as there is in the country. The reality of the current situation on offensive line is rather unfavorable for your Miami Hurricanes.

How can they hold up? If the Canes look to make any noise on Saturday, the group will need to play their best game of the season. Clemson will make some plays, but if the group can limit communication mistakes and simply hold up the Canes have a puncher’s chance to score some points.

The Clemson Tigers are very stout in the running game, but the Miami Hurricanes are no slouch in that department either. The defensive line for the Canes is a strong suit, and Wesley Bissainthe has been a bright spot at LB. It will take the entirety of the front-seven doing their jobs, and putting the game on the arm of D.J. Uiagalelei which will give the Canes their best chance for success. Neither offense in this game is particularly explosive or dynamic so it is safe to say that this game will be an old-fashioned slug fest. The team that runs the ball and stops the run best will likely find victory.

3. WIN THE WAR OF THIRD DOWNS

As previously stated, this Clemson offense is not one that produces explosive plays routinely. They are primarily a running team: they get the ball in the hands of their dynamic running back Will Shipley (look for them to isolate him in the pass game against Corey Flagg – I would at least). They aren’t afraid to use quarterback D.J. Uiagalelei in the running game either as he has 400 yards on the ground this season.

put this on repeat. then put it on repeat again.

Will Shipley is 𝐝𝐢𝐟𝐟𝐞𝐫𝐞𝐧𝐭. pic.twitter.com/SVJW15eDW8

Clemson averages an impressive 34.2 points per game, but they average a pedestrian 5.7 yards per play. This says they execute at a consistently high level but are not a very explosive team (Your explosive offenses like to live around 7 yards per play). This leads to a ton of third-down opportunities for the defense to get their offense off the field. Having offensive success on 3rd downs will be a major key in this football game that looks to a throw back between two offenses that want to run the ball effectively.

If you haven’t heard by now, I’m sure you will hear all about it in pregame prior to kick off between Miami and Clemson at 3:30PM EST on ESPN… the Canes are undefeated in league play on the road in 2022. This shouldn’t surprise any old-school Canes as we have always been the villains of college football, and nothing strokes the ego of a villain like winning on the road and sending the opposing fans home with a L. Clemson comes into the game with an ACC-record 39 consecutive home victories.

For a team searching for a bright spot in a dark season, it’s time to embrace being the villain and crash the party in Clemson, SC. Nobody expects Miami to even keep it close (19.5 point underdogs): not Clemson fans, not the Clemson football program, not even a lot of Miami fans expect this game to be competitive. When you’re on the road, its easier to lean on the man beside you when the man beside you is all you have. The Canes can accomplish this b having fun with the opportunity and playing with the freedom afforded to you since so many have written this team off.

With so many things having gone wrong this season: from schematic growing pains, embarrassing home losses, to injuries, to culture shock from a new staff, and lack of success in general… this team truly has NOTHING to lose. The offense will be working with a true freshman quarterback and a patch-job offensive line that is riddled with injuries and essentially no depth. The defense will have their physicality tested in the running game early given what they put on film against Florida State. 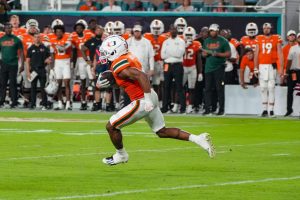 If there was ever a game where you could throw the kitchen sink at someone, it is this game. If the Miami Hurricanes are serious about leaving the field with victory on Saturday, it will be paramount that they play with a chip on their shoulder and cut it loose. Let Jacurri Brown have access to the entire offense, run trick plays, be the team that gives the opponent “something we’ve never seen on film.” Cut it loose and let it all hang out win or lose.

One thing is for certain with 2 weeks to go. In a season where the future of the program is taking shape, you’re going to find out in this game who has fight and who doesn’t. I suspect this game will be a test of physical will from start to finish. The only question is: are the Canes up for the fight themselves?

Time to swing first and keep swinging. Error on the side of absolute aggression because frankly passivity will only result in another loss. If the Canes can simply hold up on the offensive line, it can give the ‘backs some room and potentially give Jacurri Brown time to hit some big plays down field.

It will be imperative for the defense to stop the run, limit explosives, and win the battle of 3rd downs so they can keep the offense in the game. The bottom line is this: regardless of the outcome, regardless of the way the season has gone, the Canes need to cut it loose and bring the fight to their opponent for once this season. This is a culture game. The odds are stacked heavily against them this week: who is going to play Miami ball for 60 minutes regardless?