This is it. The final regular season game of the year is upon us. And it is the OBB Game Time Miami vs. Pitt edition. The Hurricanes are literally limping to the finish line straight off their 98 yard offensive performance vs. Clemson. Will the Miami Hurricanes earn bowl eligibility? Only one more chance at it. Bring on the Pittsburgh Panthers.

Pitt owns the advantage in National Championships, (9) Wins All-Time (756) and Consensus All Americans. (8) 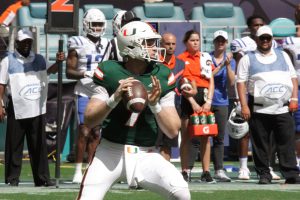 Pittsburgh with a 69% Chance to Win

GIVE ME THE KEYS – OBB GAME TIME- MIAMI HURRICANES vs. PITT

Keep it together. The season hasn’t gone to plan and the offense is anemic. But no matter how bad things get you need to keep your composure. This isn’t the week to come unraveled with senseless penalties or mental lapses. Miami ranks 79th nationally in penalties averaging 57.3 yards a game. Let’s try to hit the under on that this week. That is something the Hurricanes can relatively control.

Let Ponce call plays. What used to sound as senseless call to arms should at least be considered. Miami is only netting you 17.0 a game vs. Power 5 competition and it is painfully obvious that the offensive personnel have stopped responding to Josh Gattis. Gattis was on record this week stating that the offense had changed three times this year. I suggest we change it a fourth.