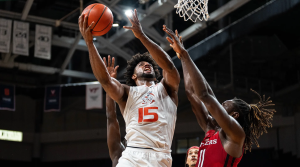 Coral Gables – The Miami Hurricanes made it three in a row with a 68-61 come from behind win versus Rutgers on Wednesday evening. The two foes were taking part in the annual ACC/Big Ten Challenge and Rutgers nation leading three-point defense showed up ready to play. The Canes were held to a meager 1-9 from long range in the first half on their way to 50% shooting and a one-point deficit at the half.

Following the intermission, it did not get better. Miami trailed by as much as 11 before they went on a 10-point run to take a 59-56 lead. Nigel Pack and Jordan Miller each had threes as the Canes were able to shoot 5-for-9 from behind the arc in the second half. Miller had a double-double with 17 and 10 while Norchad Omier added 17 and nine.

Rutgers fought back and tied the game at 61 with 2:45 left but Miami would score the final seven points to close it out. The dagger was a three from Pack with only 23.6 seconds remaining to put Miami up 66-61. Rutgers will rue a couple of big missed free throws late that could have changed the outcome. Isaiah Wong had 16 points and Miami improved to 8-1 lifetime in the Challenge Series.

Next up for Miami, a date with lowly Louisville as the Canes open ACC play at home. The Cardinals are 0-7 and have lost their last four by an average of 25 points.