Samson Okunlola Commits to the Hurricanes.

The 305 pound offensive lineman referred to as “pancake” held offers from essentially everyone. Alabama, Florida, FSU, LSU, Michigan, Notre Dame, Texas A&M just to name a few. Alex Mirabal is credited as the primary recruiter in his recruitment.

Okunlola also has a wrestling background and his feet and versatility are unmatched. This is a first round projected talent on our hands and the Miami Hurricanes are going to have a hard time keeping him out of next year’s starting line up.

“You know that is his signed graphic right. Yeah. But let’s shoot our shot.”

“He has the most accurate nickname I have ever heard for a football player, even better than Kool-Aid and we all know he’s pretty damn sweet.” –Leeds OBB Recruiting Director 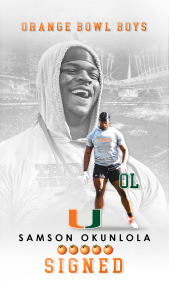