The OBB Welcomes U: Collins Acheampong

The Orange Bowl Boys welcome Collins Acheampong to the University of Miami. The 6’7″ 255 behemoth from Rancho Santa Margarita, California played at Santa Margarita Catholic High school. The former University of Michigan recruit flipped his commitment to the Hurricanes and coach Rod Wright is credited with his recruitment.

Acheampong flipped his commitment from the Wolverines on November 29th and pledged to the Hurricanes on the same day.  This OBB Four Orange Recruit also ranks in the ESPN top 300. Mario’s loafers were no match for the competition and the signing of the 24th best defensive end in the nation is huge.

Im announcing my Commitment to the University of Miami 🧡💚#hurricanes @Hayesfawcett3 pic.twitter.com/d6VkRc36aR

Although listed as a athlete, Acheampong will add much needed depth to the Miami Hurricanes defensive line and could easily find himself as an immediate impact player. Acheampong also is a dual sport athlete who played basketball for Santa Margarita Catholic High School.

“His wingspan is legendary. If he was a plane he would come with first class seating and lots of leg room too.” 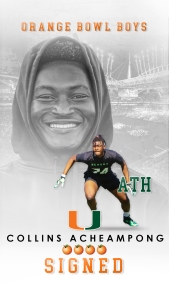