The OBB Welcomes U: Frankie Tinilau

The Orange Bowl Boys welcome Frankie Tinilau to the University of Miami. The Loafers didn’t have to travel too far from Miami’s campus to secure this OBB Three Orange Recruit, a local product from Immaculata-La Salle High School in Miami, Florida. He committed to the Miami Hurricanes on April 11, 2022. Alex Mirabal is listed as his primary recruiter.

Relatively new to football, the Australia native has been a late bloomer in the recruiting cycle. Since being committed to Miami in April, he’s received offers from some major P5 players the last month including Auburn, Oregon and Penn State.

Australian. Raw. Huge. Standing at 6-foot-5, 315 pounds, with a rugby background, Coach Cristobal and Coach Mirabal are hoping the rugby nastiness will translate to the football field.

“A big boy from down under who played rugby sign me up.”

“Not everyone from Australia who plays for the U needs a bunch of tats bro.” 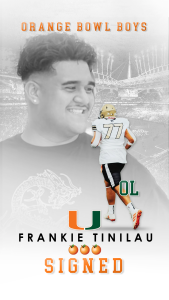