The OBB Welcomes U: Kaleb Spencer

The Orange Bowl Boys welcome Kaleb Spencer to the University of Miami. This OBB Three Orange Recruit is from Life Christian Academy in Colonial Heights, Virginia. He committed to the Miami Hurricanes on October 28, 2022. Athlete check. Spencer also played running back as a freshman in high school.

The Loafers made their presence felt with this former Oklahoma commit.  Spencer decommitted from Oklahoma and committed to Miami on the same day. He also held offers from schools like Kentucky, Maryland and Tennessee, among others.

Standing at 6-foot-2, 215 pounds, Spencer has some versatile size to be used in multiple roles on the defensive side of the ball. He played both Linebacker for Life Christian Academy. Both rooms would welcome the addition of Spencer, as both rooms need an influx of talented depth.

“Smart move decommitting from Oklahoma and picking the U. That conference hasn’t played defense properly since 1985.”

“They do at least have Brent Venables now.”

“Venables was no match for the loafers.” 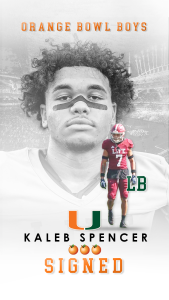 Join the discussion today at Discord-U when you sign up for OBB Legendary access. It is 247-365 wall to wall coverage of all things Miami Hurricanes. You also receive access to the VIP Recruiting Central Channel and a whole lot more. Become a Legend today and join the fastest growing Miami Hurricane community.