The OBB Welcomes U: Malik Bryant

The Orlando native Bryant is listed in the ESPN 300 and is rated the sixth best linebacker at his position. This front seven player is an absolute nightmare for opposing offensive tackles. He is someone you could plug in play in both odd and even man looks. Bryant is also bestowed the honor of an OBB Five Orange Recruit.

Come January I’ll be a freshman at THE University Of Miami and practicing on GreenTree in no time. Oh and by the way MY RECRUITMENT IS 1000% CLOSED. When I’m playing on Sundays it’ll say I graduated from the U ! 🧡💚@coach_cristobal pic.twitter.com/CCxmnVodXs

Charlie Strong is credited with this talented linebacker’s recruitment and the linebacker room is getting an incredible boost from Bryant. You have to also fear the loafers at all cost. Mario Cristobal isn’t playing around.

“This is the number one linebacker in the country in my eyes. Bryant is a boss. These ACC running backs are going to shit their pants.” 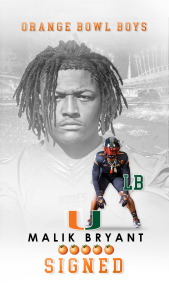