The OBB Welcomes U: Mark Fletcher

The Orange Bowl Boys welcome Mark Fletcher to the University of Miami. The OBB Four Orange Recruit is the product local powerhouse American Heritage High School in Plantation, Florida. He committed to the Miami Hurricanes on December 18, 2022.

An All-American Bowl invitee, Fletcher is ranked as the 251st player overall and the 15th running back in the nation. After decommitting from Ohio State in November, it was a battle between Florida and Miami for this coveted back. But loafers stuffed ol’ G5 Billy back in his locker and secured the commitment. He is the second running back in Miami’s class, along with fellow local product Christopher Johnson.

Fletcher is an imposing back standing at 6-foot-1, 220 pounds. He looks to be the thunder to Christopher Johnson’s lightning in the class. He also adds depth to the Running Backs room. As we learned this past season, can’t have enough depth at that position.

“Do you remember when we had a hard time pulling people from American Heritage?” 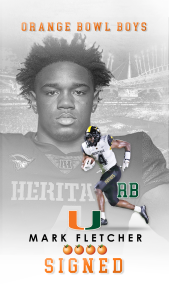