The OBB Welcomes U: Raul Aguirre

The Orange Bowl Boys welcome Raul “Popo” Aguirre to the University of Miami. The 6’1″ 220 inside linebacker from Fayetteville, Georgia played high school at Whitewater High School. Aguirre committed to the Hurricanes on July 12th and had offers from schools such as Alabama, Florida and Ohio State.

The Dade County born Aguirre committed to the Miami Hurricanes and didn’t even take his official visit at the time. Aguirre is listed in the ESPN 300 and is ranked the 4th best inside linebacker in the nation. We tout Popo also as an OBB Four Orange Recruit and he is a welcomed addition to the linebacker room.

Blessed but I accomplished nothing!… Not until I win A National Championship at the 🖐🏽🤚🏽🟢🟠#GoCanes 🙏🏼 pic.twitter.com/gFE3CYlGsn

Aguirre primarily played MLB as a sophomore and has some plus closing speed to his game. Popo is also someone who looks very comfortable in space and wouldn’t be considered a liability in coverage. You want him at the end of the line of scrimmage? He can do that too. His recruitment is credited to Charlie Strong

“Bro he is a missile who doesn’t have to come off the field. He is an angry Mike. I like angry Mike” 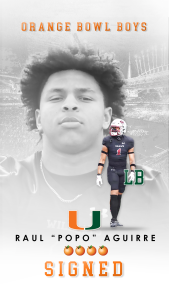