The Miami Hurricanes look to build off of their strong 2022 season. The Canes were 40-20 overall and 20-10 in ACC play. As they begin the 2023 campaign with Omaha in their sights, the goals are lofty. New additions, mixed with returning talent, should make for a very interesting team in 2023. The OBB Hurricanes Baseball Preview is on deck.

This is part one of four in the OBB Legend position-by-position breakdown, starting with: The Infield 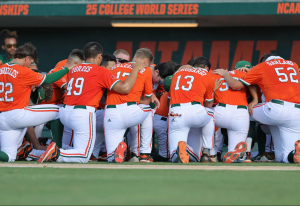 The infield will probably look the same as it did for most of last season with catcher being the lone question mark. Morales and Kayfus will return as the anchors of the lineup. When they were on, this lineup was unstoppable.

A true freshman last season, Dorian Gonzalez showed major flashes at the plate before being sidelined with an injury. He started the season on a tear with a .345 average over his first 15 games. He ended up slashing .263/.354/.346 in 44 games played, amassing 10 multi-hit games. The talent is there.

Dominic Pitelli is one of the rocks of this team. The slick-gloved shortstop will anchor the infield defense. He won’t wow you with the bat but his solid defense at shortstop makes up for it.

And what else can be said about Yohandy Morales? Ranked as the 15th best prospect in June’s MLB draft, Morales looks to be a staple in the middle of this lineup. Morales led the Canes in doubles (17), home runs (18), RBIs (59) and slugging percentage (.650) in 60 games played. If Morales can continue on his upward trajectory, this Hurricanes lineup can be dangerous.

Coach Di Mare will have a decision to make at the catcher position. Losing a huge talent in Maxwell Romero to the MLB draft, the Canes will have to find some answers behind the plate. Look for Carlos Perez, JD Jones and Oregon transfer Jack Scanlon to platoon. Neither had very impressive numbers at the plate last season. But Scanlon has started 79 games in his career so he’ll bring some much needed experience behind the dish.

Stay tuned for part two where we will go in-depth on the outfield and DH positions.

The Shake is the Canes Baseball hub at Discord-U. Join the discussion today and be part of Discord-U. The OBB Legend is its exclusive home and we will put a welcome mat out for you.