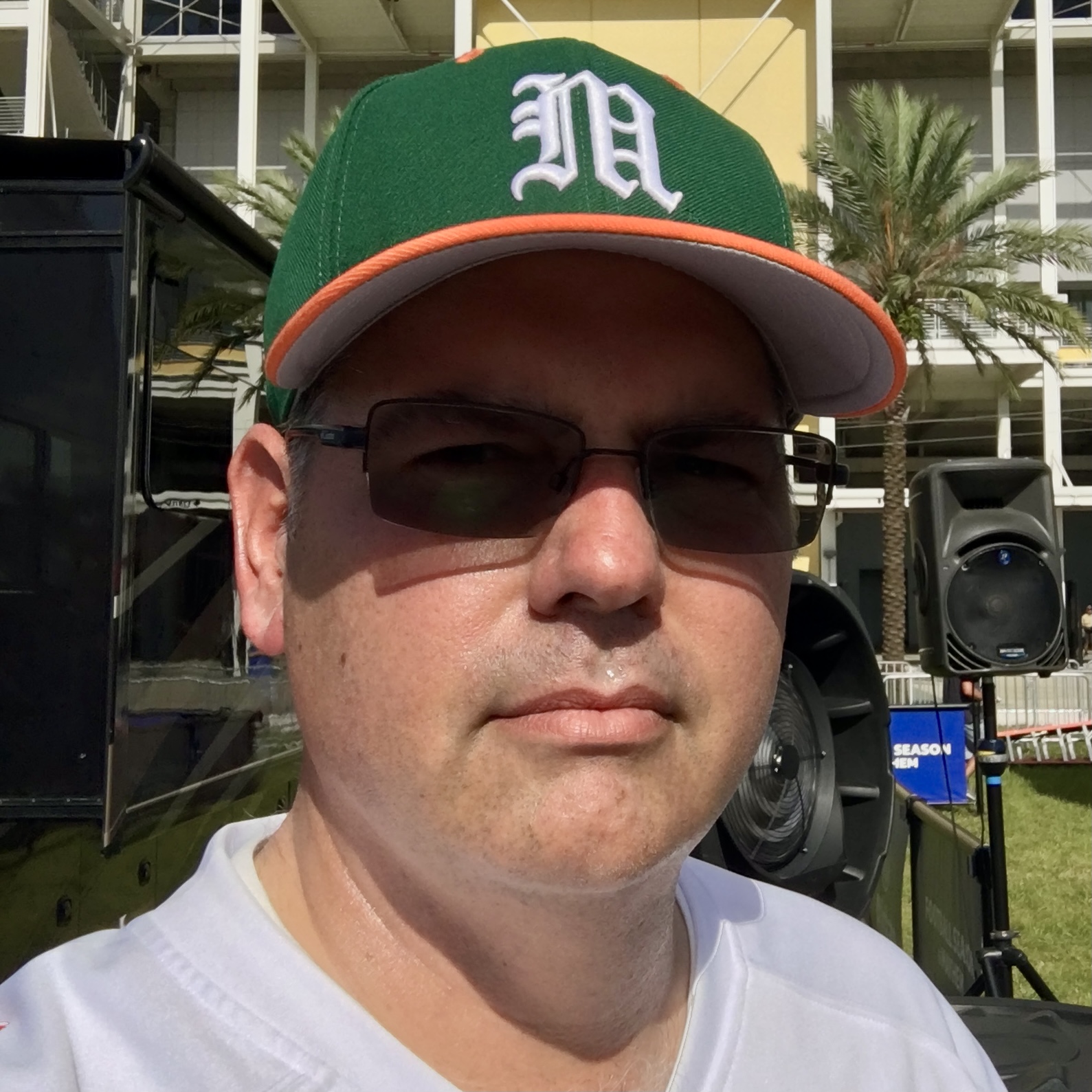 Born and raised in Miami, live in Vero Beach now. Old enough to have witnessed the Decade of Dominance in the Orange Bowl and look forward to the sequel. Canes and planes are two of my greatest passions. 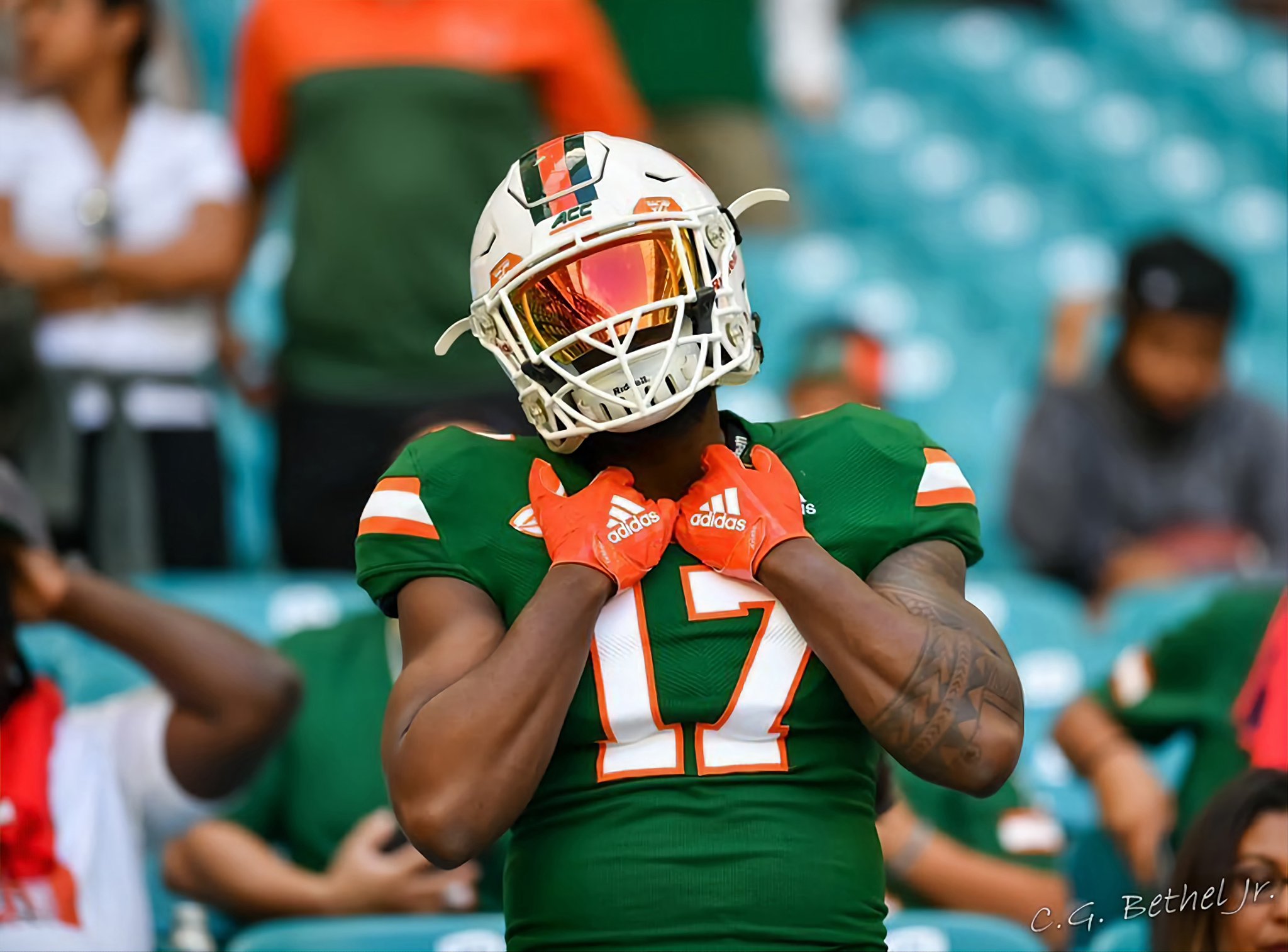 Hello I’m Shelton Douthett aka Da 12th man aka that guy in the uniform. Originally born in Queens, New York but raised in Miami Gardens. I work in law enforcement for the past 6 years. I am also a season ticket now for 13 years and still going strong. As for my backstory…Me and my brother were huge Miami Hurricanes fans. Went to every game together, matching jerseys and everything. People knew us as the twins. In 2009, we went to our first away game in Tallahassee. After that game, my brother became sick. I missed a couple of home games to watch the games in the hospital with him. While in the hospital, my brother asked me jokingly when would I wear all the Miami Hurricanes memorabilia to a game. I said “as soon as you get out the hospital, I’ll do it”. About a week later, he got better and left the hospital. But the pneumonia came back. So unfortunately he passed away. When the Miami Hurricanes were chosen to play in the Champs Sports Bowl in Orlando, I knew I had to keep my promise. So I bought cleats, game used pants, shoulder pads, gloves, and I used one of my helmets I bought from Ebay. I went to the bowl in a full Miami Hurricane uniform. People thought I was an actual  player walking around. Some would come and ask why am I dressed like this. When I told them, I got a lot of hugs and them telling me they admire my commitment and the love I had for my brother. Some even donated to the scholarship fund me and my parents started. So as the uniforms evolved on the field, so did mine. I tried to keep up and look like I belonged on the field as me and my brother always used to talk about being on the field with the Hurricanes. 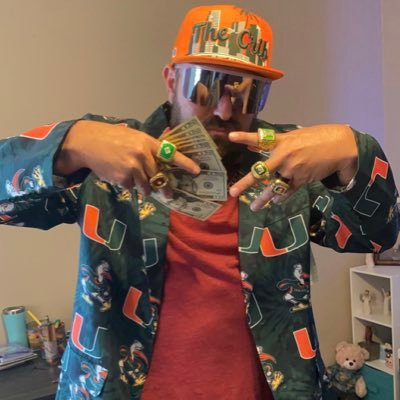 Corey Enfield aka CanesRev605 hails from the home office in South Dakota(I am almost 100% certain I am the only Canes season ticket holder in the state🤪). Not only am I a diehard Canes fan I also am a diehard “Dance Dad”. If you think college football fans are crazy, you should see the dance parents when their kid doesn’t win.

I look forward to my role with the “Legend” which is to bring “Top 10 Lists” and “Power Rankings”. As you can tell by my profile picture I don’t take myself to serious so you can expect a laugh or two along the way. 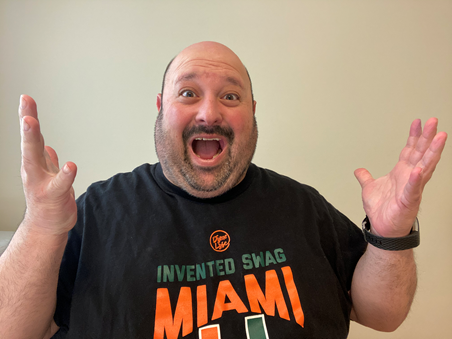 Brian “The Beast” London has been around The U for close to 30 years. The Beast grew up in Boston, but has been a Canes fan his entire life, as his mom grew up a few blocks from The U. The Beast graduated from The U in 1998 with a B.S. in Broadcasting and Political Science. He was on the Canes broadcast team as the Football sideline reporter, hoops in-game host, and baseball play-by-play man for a decade. A veteran of the South Florida sports radio wars, The Beast is now holding down a down-low day job, while getting his MBA and Masters in Media Management from Lynn University. He lives in Broward County with his wife Alison, son Zach, and dogs Charlie and Marley. 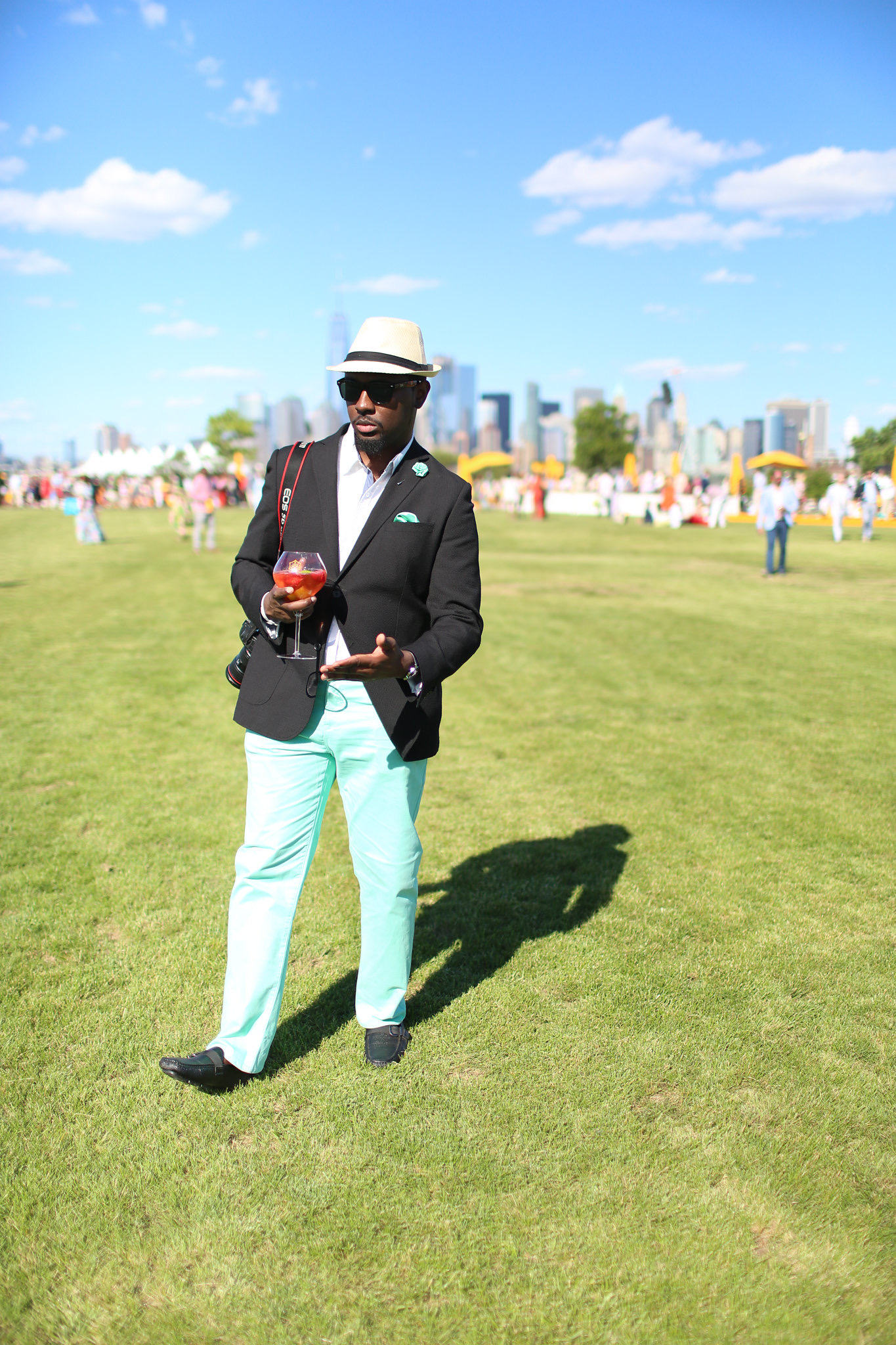 Simon was born and raised in Miami, Florida and is passionate about all things Miami sports (Canes, Dolphins, Heat, and Marlins). As a lifelong fan since the 90s and seeing the Canes through the years, Simon brings an analytical perspective and loves to think of how the Canes could be based on the past and the present. Simon is excited to grow the OBB Legend to a place where Canes fans have varying perspectives of our team! 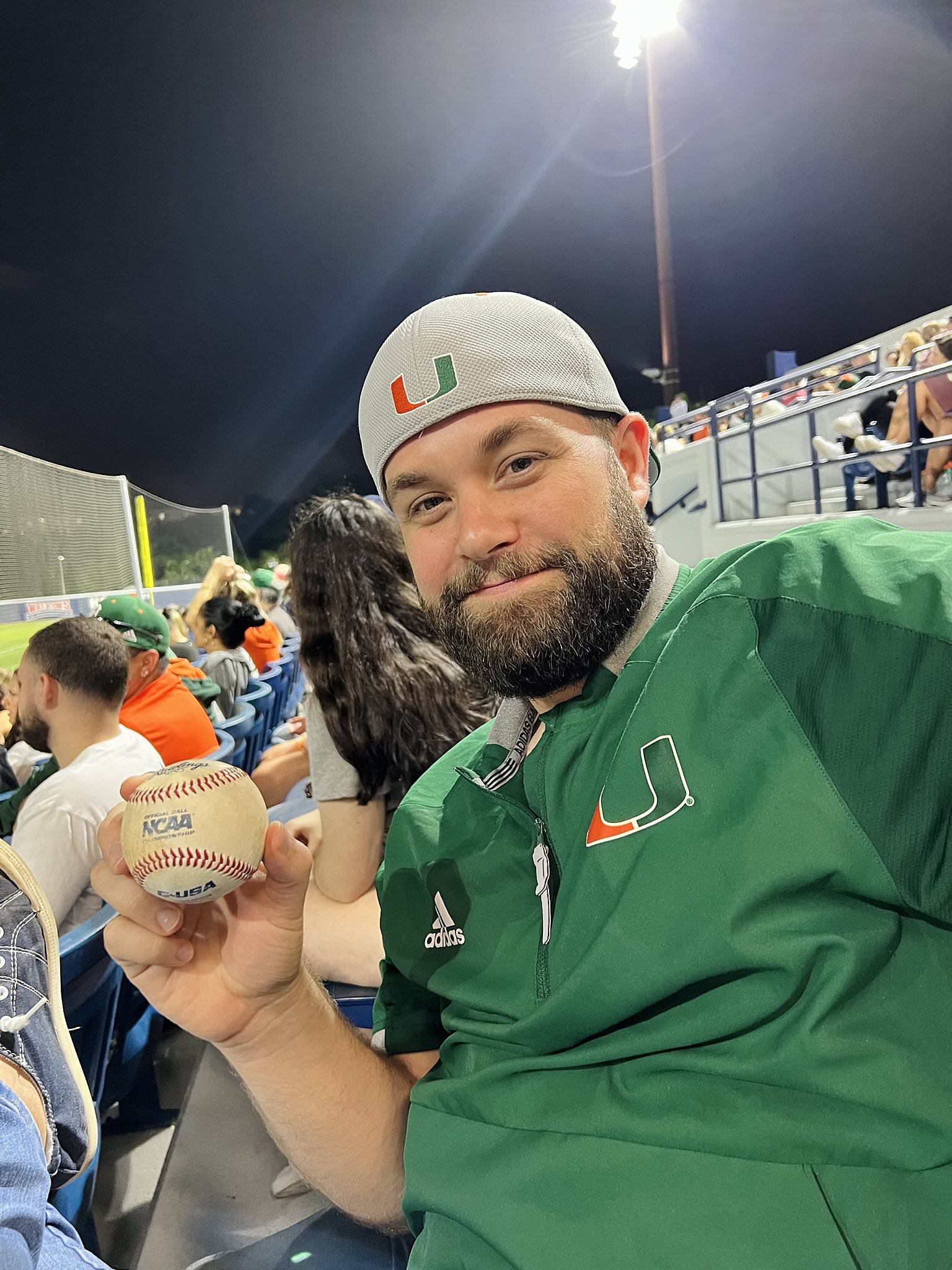 Tony Valdes was born and raised in A-Rod’s hood of Kendall, FL. As a life-long, die-hard Canes, Dolphins and Marlins fan, his fandom has been tested on many occasions but his passion is always strong – thank God for the Heat. Other passions include his family, his friends, music, good food and good drinking. He is one of the Co-Hosts of the “Canes Call In” podcast.
Authored Articles 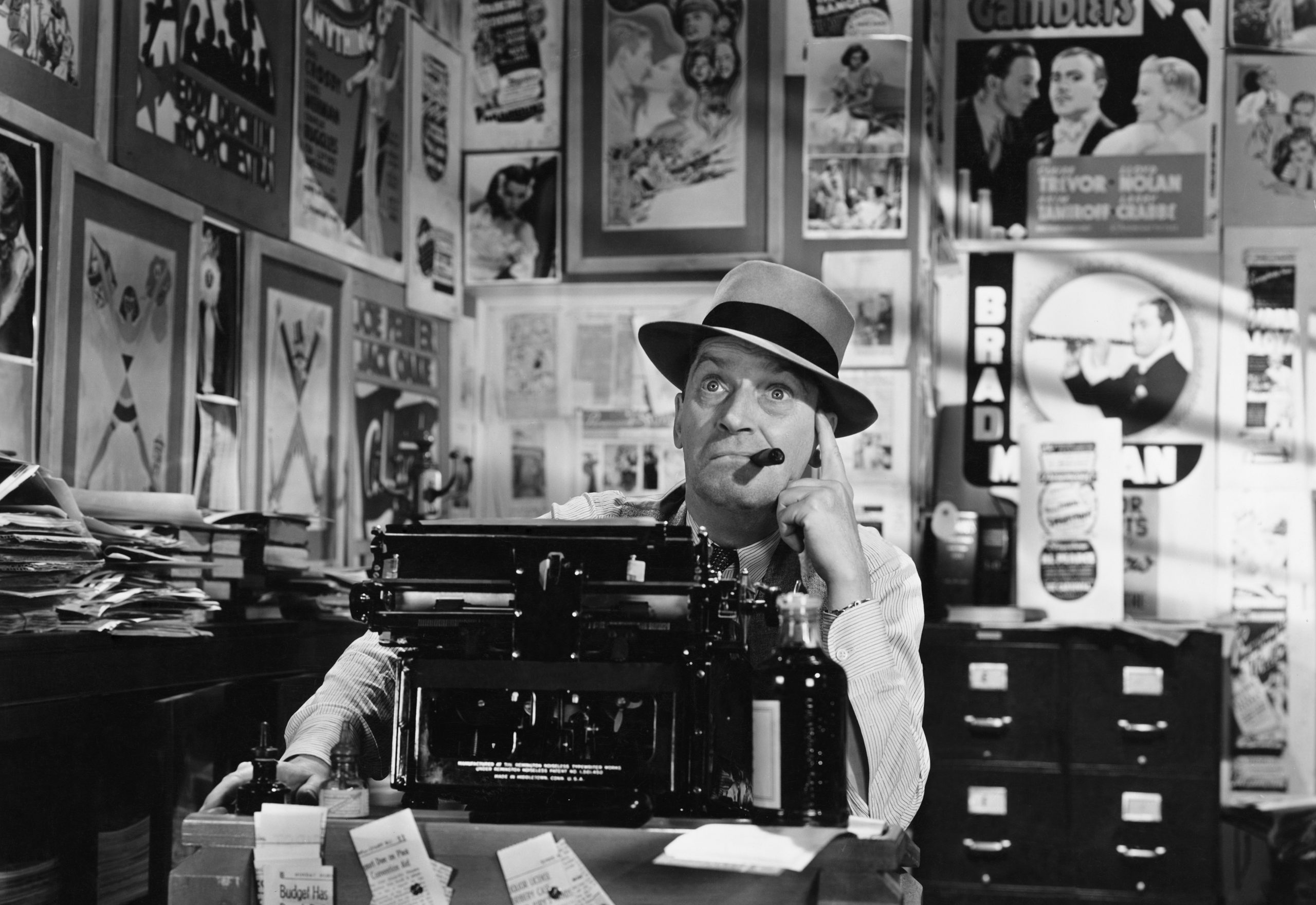 Irving Paul Daley is the resident Ombudsman for the OBB Legend. A noted figure in the college football world, I.P. has mentored some of the finest sports journalists not presently on ESPN. His encyclopedic knowledge of the sport will allow him to bring a viewpoint that is too often shunned in today’s media; a white, nonagenarian from the northeast. I.P. demanded we mention that him joining was predicated on him being allowed to work from his beachside condo in East Boca and never having to come to our office or any events.

OBB Legend contributor Matt Bridges is from Huntington Beach, California. This California cane is a former basketball coach, who covers all things canes hoops and football related. He is responsible for SOTG Hoops and is the Co-Host of the “Canes Call In” podcast.

Jake was born in Plantation, FL and since he could walk he spent Saturdays in the Orange Bowl with his dad cheering for the hometown Miami Hurricanes. His mom’s job with UPS moved the family to Birmingham, AL where he spent his formative years throwing up the U despite the bombardment of Roll Tides & War Eagles around him. Jake went on to use athletics to earn a scholarship playing both football and baseball at Birmingham-Southern. He went on from there to earn an engineering degree from Auburn University and move to Nashville, TN working full time as an aviation engineer. After spending 4 years in the Music City, Jake has since returned home to Birmingham, AL where he now lives and works. In his spare time, Jake enjoys staying active on the Peloton, golfing, traveling, spending time with family, and keeping up with the Canes. His favorite former player is Devin Hester, and his favorite annual tradition is traveling to a new college town with his dad each time the Canes visit a new and exciting venue.

“The fight is won or lost far away from the witnesses, behind the lines, in the gym, and out there on the road; long before I dance under those lights.” – Muhammad Ali

Jason Hudgins (28) from Valdosta, Ga. Die hard Miami Hurricanes fan, became a Miami fan when I was very young through my grandparents. Parents and siblings are Florida State fans. I own a small “outdoors” hat brand called Tailored South Hat Co. Formally a Co-host of Stadium Drive Podcast from 2019-2021. Hobbies include being a terrible golfer, bass fishing and hanging out with family/friends. I make the 6 hour drive at least 3 times a year to go to Miami home games. I’m very honored and excited to be a member of the OBB Legend family.

Steve Kim is a veteran boxing reporter, having covered the sport onvarious platforms since 1996. Currently, he writes a regular column forSNAC,com (‘K9’s Corner’), along with doing the ‘the 3 Knockdown Rulewith Mario Lopez’ on Triller. He is also a regular contributor on’Fearless with Jason Whitlock.’

His other passion is Miami Hurricanes football. Steve, a native of LosAngeles has been going to Hurricane games(both home and away games) forthe past 30 years. He has also penned various articles and columns inthe past to Canestime and CanesInsight.

am a passionate Canes fan by way of pure happenstance; came over to the US in 2011 from the UK (hence the Leeds portion of LeedsCane) to attend UGA (University of Georgia). While there, I ran into a guy who was on the football team who was, like me, a total gamer and nerd. Turns out he was one of their best WRs and that was my in to football. I got to form good, long relations with Coach Richt and his staff and I had such a fondness for him that when his tenure at Georgia ended and he was hired at Miami, I followed him as a fan. I fell in love with Miami’s football culture immediately, the diehard nature, the swagger, the legacy and the legends made it so easy to see why Coach Richt went home and I was bought in completely. Since that day I have become just more and more of a true fanatic and I have used my UGA connections to grow my Miami ones. One thing led to another and now I am thrilled to have coaches (HS, College, 7 on 7) staff, alum, boosters and other influential people within the Canes community and throughout the country at my fingertips. From their lips to my ears, to my fingertips and your eyes, that’s the path that my info takes and it’s an honor and privilege to share it with you all!

Committed to finding balance between the power of data and analytics with the fact the eye in the sky does not lie. Passionate about understanding the how and why. Firm believer in sound process leads to great results. X’s & O’s junkie.